Balneologist in Franzensbad//Františkovy Lázně during the summer months

Subjected to anti-Semitic persecution from 1938

Alfred Lustig studied medicine in Vienna, where he received his doctorate. He ran a medical practice in Vienna’s 9th district from 1891 to 1896, during which time he also helped in the nightly medical rescue service.

He worked as a spa doctor in Merano from 1898. Lustig ran an outpatient clinic in Freiheitsstrasse as a recognised balneologist. He was also the head doctor of the “Radetzky Dietary Spa Pension” in Merano. He had a wide range of diagnostic facilities available to him for the time, including a chemical and a microbiological-bacteriological laboratory as well as X-ray diagnostics.

Lustig mainly practised in the well-known spa town of Franzensbad/Františkovy Lázně, Bohemia, Czech Republic during the summer months and worked in Merano during the winter months. Franzensbad, along with Marienbad/Mariánské Lázně and Karlsbad/Karlovy Vary, was one of the world-famous spa towns in former Bohemia at the time, owing to its mineral springs.

He was a respected member of the Jewish community in Merano. He was involved in the inauguration of the Merano synagogue in 1901.

He participated in the First World War in a responsible position as a medical doctor in charge of military hospitals in Bessarabia and Galicia, among other places.

Around 1,500 Jews lived in Merano in the 1930s and there was an active Jewish community. Anti-Semitic campaigns were already taking place in the city as early as 1933. The Italian racial laws of 1938 aggravated the situation of the Jews. Lustig’s record received the addition “Jewish race” in the wake of the “Jewish Census” in 1938/39. His Italian citizenship was revoked in June 1939. In Franzensbad he was exposed to anti-Semitic agitation in 1939 following an article in the Nazi newspaper “Der Stürmer”.

Lustig’s son, the physician Dr. Hans Josef Lustig, took his own life at the age of 44 in November 1939. His daughter Stella was deported from Zagreb in 1942 and taken to the Stara Gradiska concentration camp in Croatia. She died in June 1942 at the age of 48. His daughter Margarete managed to escape to the USA and lived in Oswego, a small town in New York State.

We are very grateful to Ulrike Zischka, Munich, for valuable information on Lustig’s biography. She has done extensive research on his life. Joachim Innerhofer, of the Jewish Museum Merano, kindly provided the photograph of Dr. Lustig’s grave at the Jewish cemetery in Merano. We would like to thank the archives of the municipality of Merano for providing important documents. 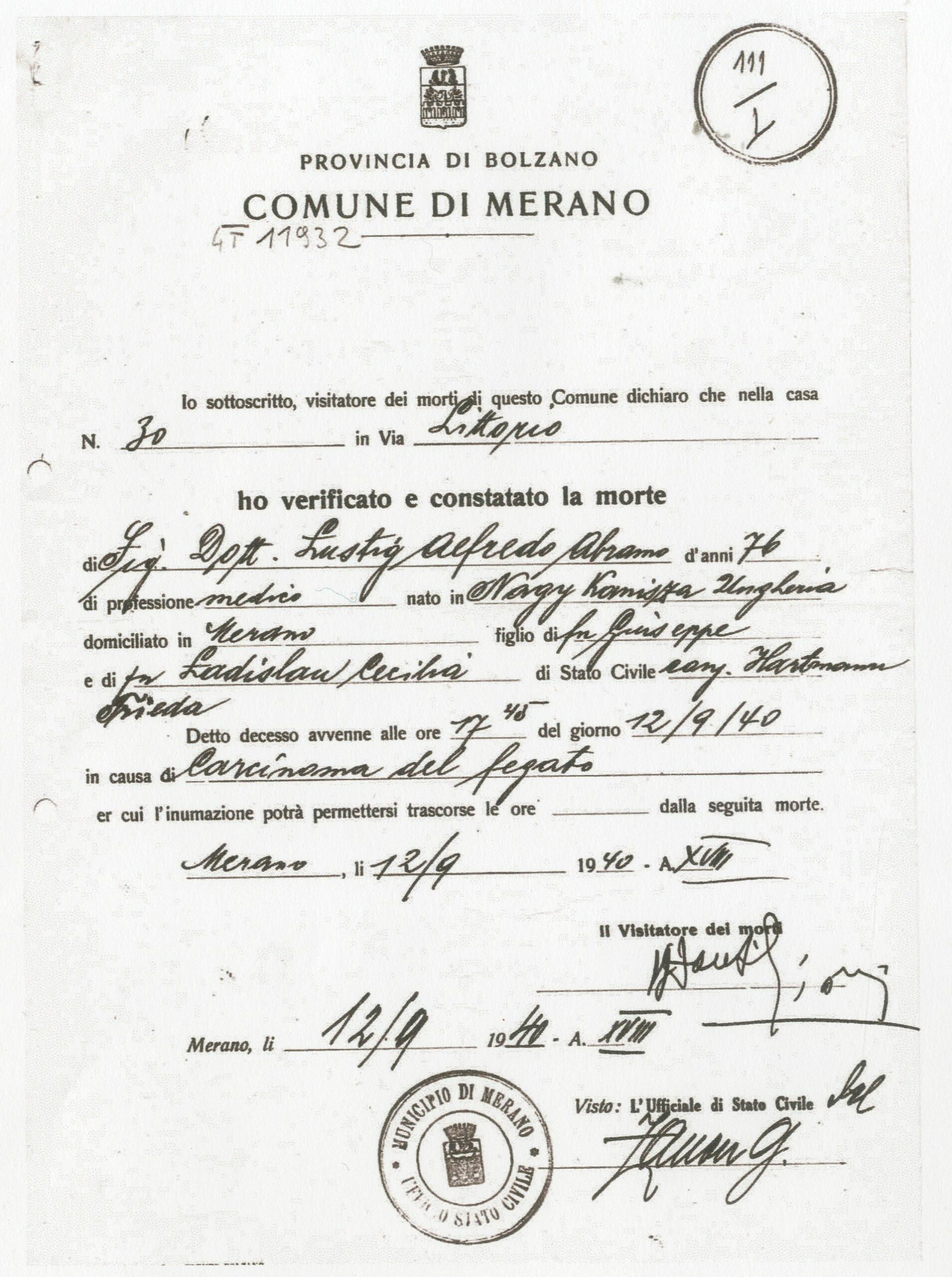