Imprisonment at Sachsenhausen concentration camp following the November pogrom in 1938

Close cooperation with Ismar Boas at his private clinic in Berlin

Hirschberg studied medicine in Berlin, Würzburg, and Heidelberg. He received his doctorate from Heidelberg in 1913. He was licensed to practise medicine in August 1914.

Hirschberg worked at the Berlin private clinic for gastrointestinal diseases run by Ismar Boas in the Trautenaustrasse from 1925/26 to 1938. He also ran a specialist gastroenterological practice. Hirschberg was part of the inner circle of students and friends of Ismar Boas.

Whilst working at the “Boas Clinic” in the Trautenaustrasse, he ran regular advanced training courses in his specialist field: gastrointestinal diseases. This led to the publishing of “Diagnostik und Therapie der Magen- und Darmkrankheiten in zwölf Vorlesungen” by Ejnar Munksgaard in Copenhagen during Hirschberg’s exile in Norway in 1941.

Hirschberg was temporarily imprisoned at the Sachsenhausen concentration camp after the November pogrom in 1938.

Following his release from concentration camp, Fritz Hirschberg fled to Oslo, Norway, on 22 January 1939 with considerable help from the shipping company owner Thomas Olsen. Hirschberg was able to bring his 73-year-old mother, Meta Hirschberg, from Potsdam to Norway on 25 May 1939, also with Olsen’s help. Hirschberg initially worked as an assistant to the Norwegian doctor Per E. Giertsen before opening his own practice.

The German Wehrmacht invaded Norway on 9 April 1940. Jews who had fled Germany – as well as the Norwegian Jewish population –were subjected to increasing persecution in the course of the following two years. The authorities began the systematic registration of Jews living in Norway in January 1942. Their identity papers were marked with a “J” for Jude/Jew.

Hirschberg’s mother, now 77 years old, was arrested by the GESTAPO in November 1942 and deported on 26 November 1942 with the D/S Donau, first to Stettin and from there by train to Auschwitz, where she was murdered shortly after her arrival on 1 December 1942.

Fritz Hirschberg, who had been living underground since the end of October 1942, was able to reach Sweden with a group of refugees at the end of November 1942, four days after his mother’s deportation, with the support of Norwegian resistance groups. He returned to Norway in November 1945 after Norway had been liberated and opened a new practice in Oslo in 1946.

Hirschberg became publicly known in Norway in the 1950s through newspaper articles with dietary recommendations for functional gastrointestinal complaints.

Hirschberg lost both his mother and his aunt Auguste Zöllner, Potsdam during the Holocaust. She was deported to Theresienstadt in June 1943, where she died at the age of 91.

We would like to thank the Norwegian historian Bjarte Bruland for valuable details on Fritz Hirschberg’s biography in Norway and for pointing out the newspaper article in the Norwegian newspaper Billedjournalen.

The research into Hirschberg’s biography shed light on the fate of his mother for the first time. In this context, it was suggested that a “Stolperstein” (stumbling stone) be laid in memory of Meta Hirschberg in Potsdam. 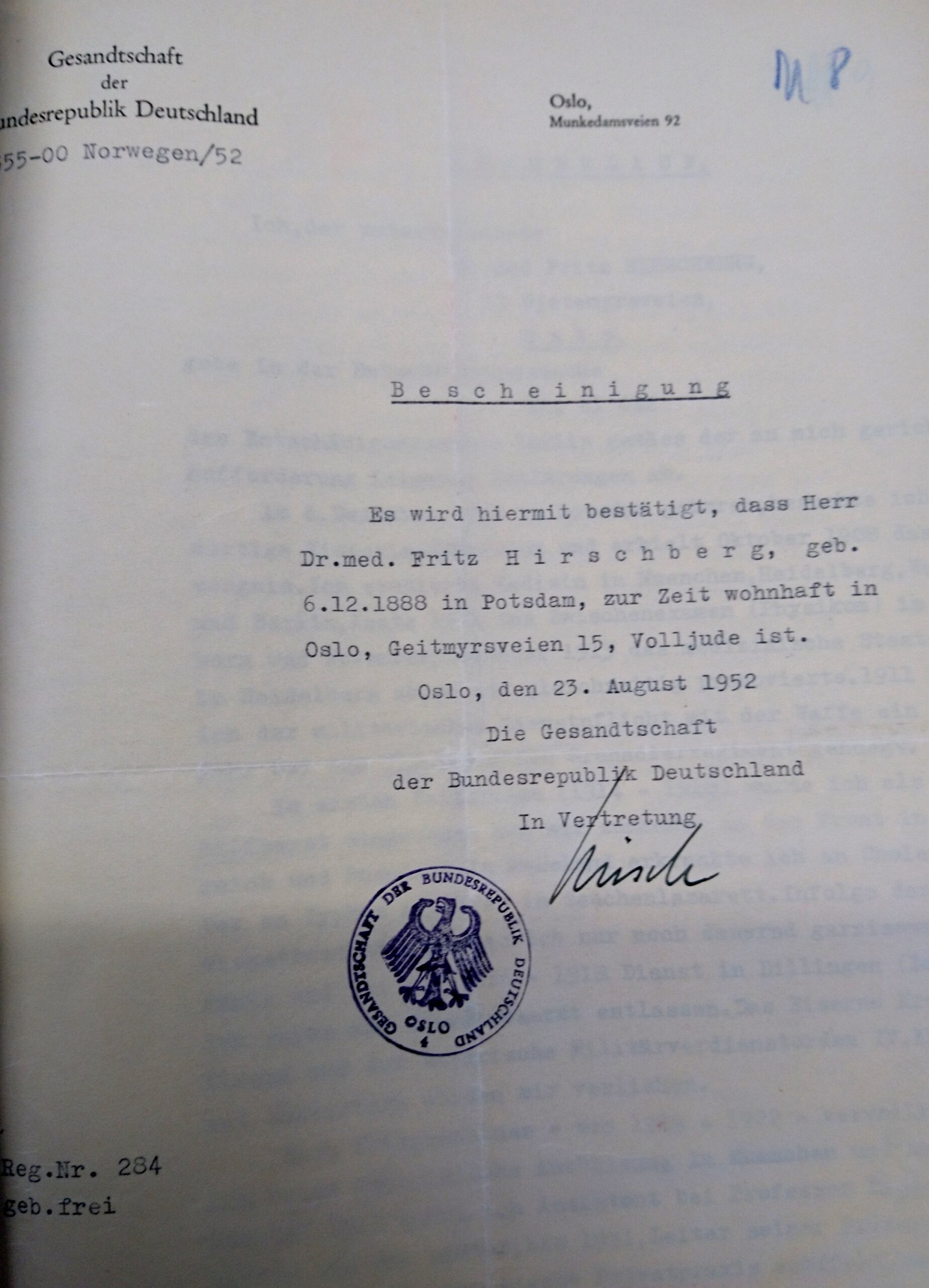 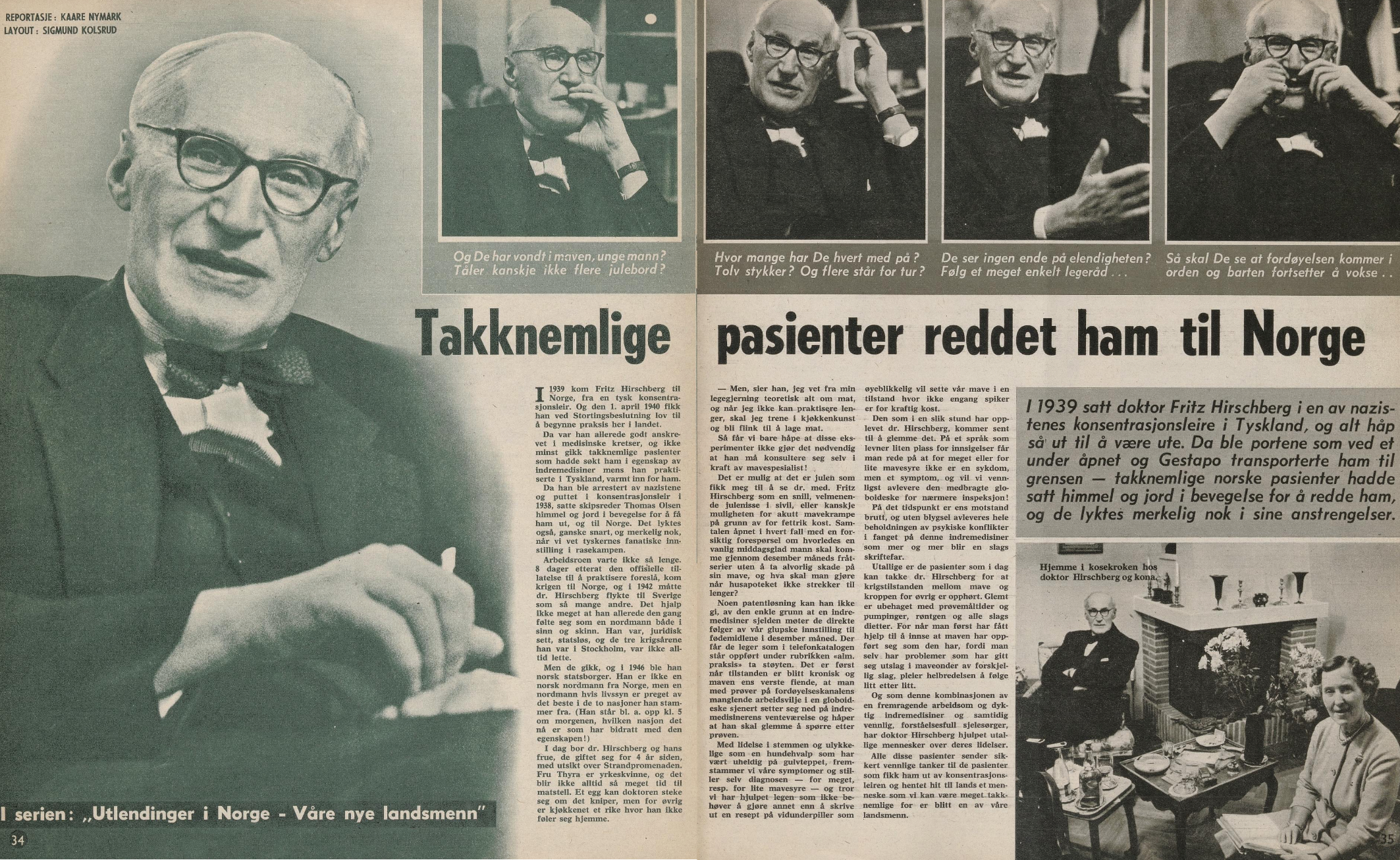 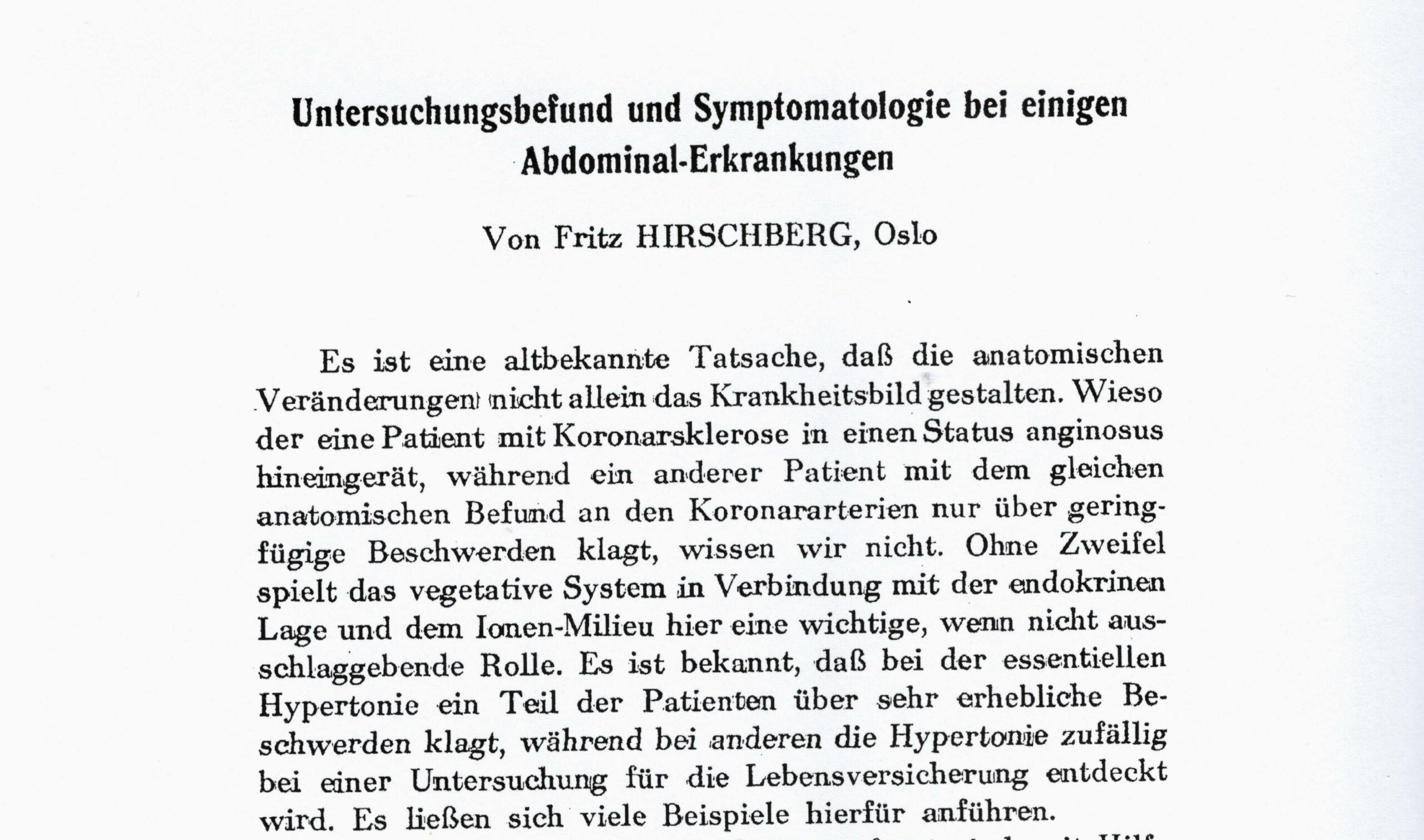 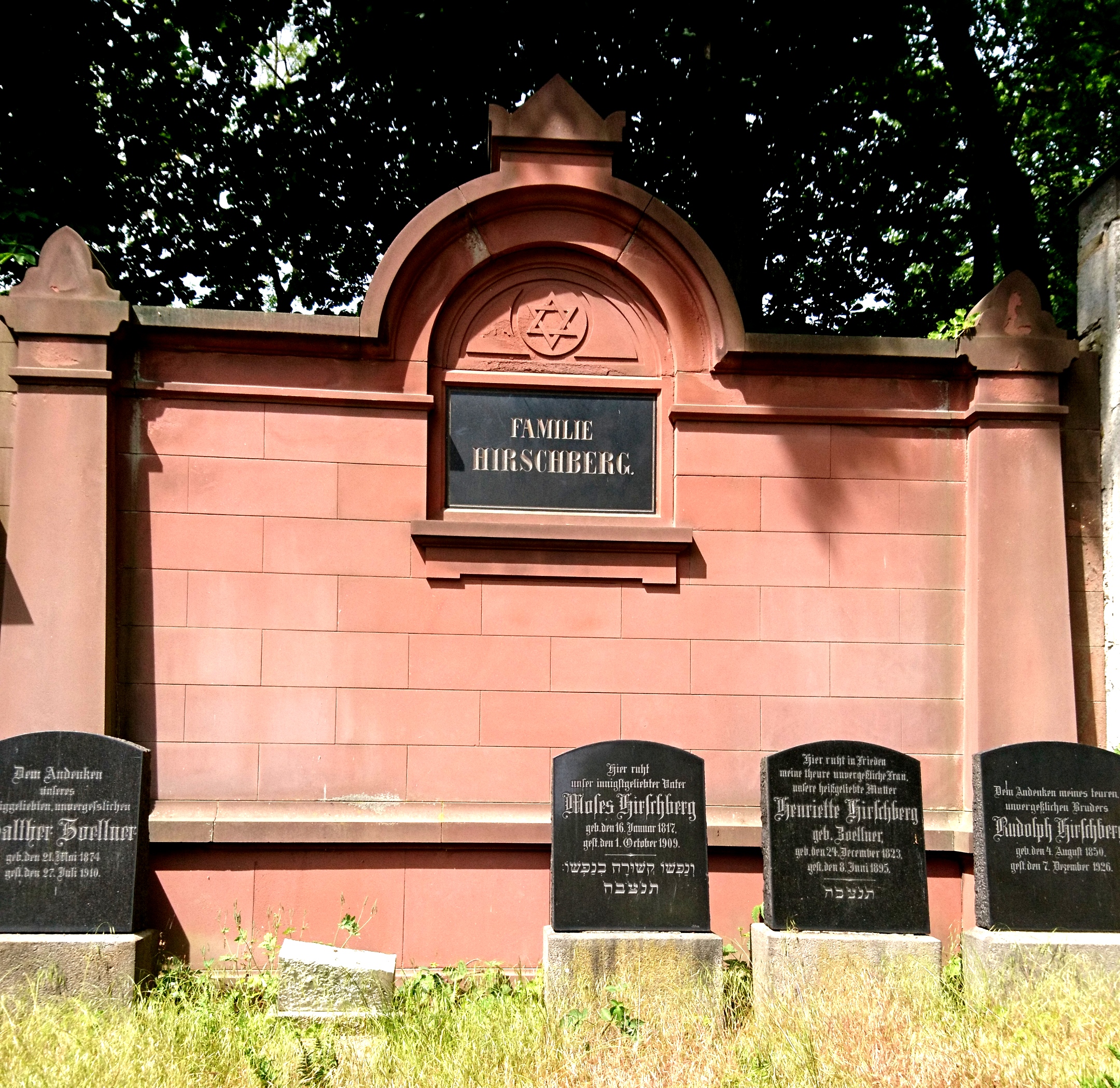 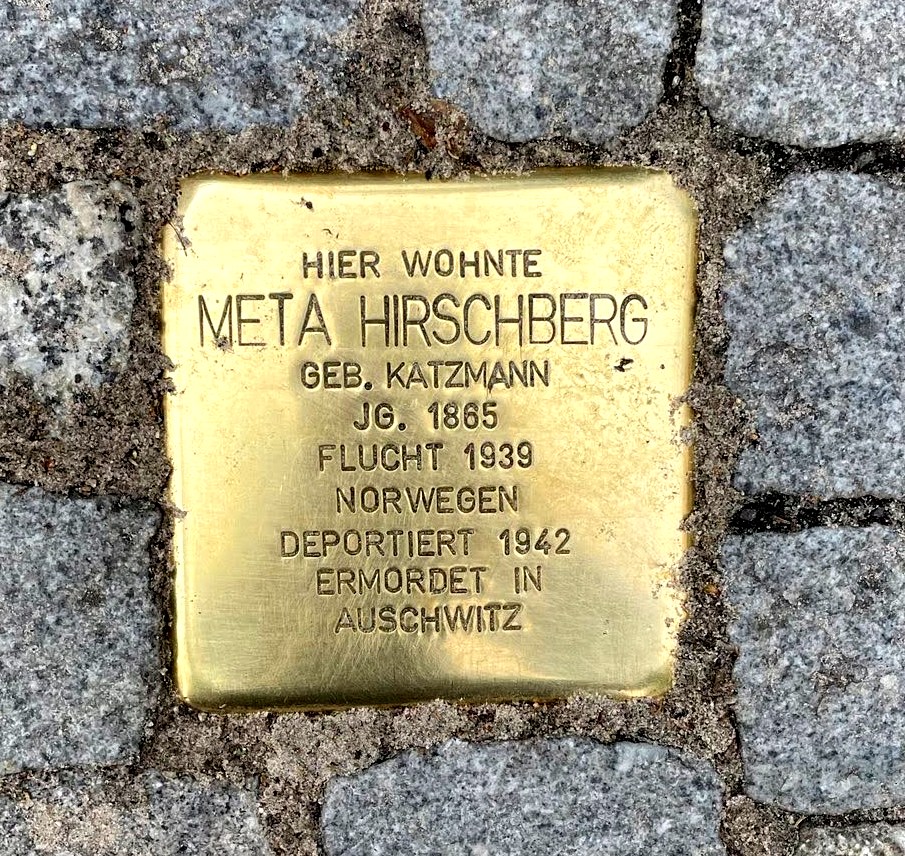