Son of Leopold Kuttner, one of the founding fathers of the scientific society.

Cooperation with the neurologist Fritz Lewy at the Charité 1925/26

“I was born in Berlin on 23 July 1902 as the son of the “Geheimer Sanitätsrat” (privy councillor of public Health, honorary title during the German empire) Professor Dr. Leopold Kuttner. I passed my school-leaving examination at the Mommsen Grammar School in Berlin-Charlottenburg on Easter 1920 and went on to study medicine in Berlin. I passed my preliminary medical exams in Berlin in the summer semester of 1923, and my state examination in Berlin in the winter semester of 1924/25. I have been working as a medical trainee at the II Medical Clinic of the Charité since June 1925″, Hans-Peter Kuttner states in the curriculum vitae of his dissertation. His mother was Elisabeth Kuttner, née Sass, who came from Schleswig-Holstein.

During his work at the II Medical Clinic of the Charité under Friedrich Kraus, Kuttner cooperated with the resident neurologist Fritz Lewy. Kuttner received his doctorate from the Berlin University in 1926 with the thesis “Pathologisch-anatomische Untersuchungen zur Verwandtschaft der menschlichen epidemischen mit der tierischen Herpes-, Kling- und Staupe Encephalitis”. He received his licence to practise medicine on 16 June 1926. Kuttner worked intensively on neurological diseases and specialised in this field. He worked as an assistant physician to the neuroscientist Otfried Foerster in Breslau/Wroclaw in the department of neurology at the Wenzel-Hancke Hospital from 1 August 1926 to 31 July 1927. Following a training period at the Neurological Institute of the University of Vienna with Otto Marburg, Kuttner returned to the Wenzel-Hancke Hospital in Wroclaw as an assistant physician to Otfried Foerster on 1 April 1928. Kuttner began working as an assistant physician at the Landes-Heil- und Pflegeanstalt Uchtspringe near Stendal on 1 June 1930, and was promoted to senior physician with civil servant status on 1 July 1931. The facility had been run by the young psychiatrist and neurologist Heinrich Bernhard since 1929, with whom Kuttner had been well acquainted during his time in Berlin.

Kuttner had intended to move to the Heidelberg Psychiatric University Hospital in 1933 to work with Karl Wilmanns with the aim of habilitating and took leave of absence in Uchtspringe on 1 April 1933. These plans fell through, especially as the post intended for him in Heidelberg was blocked and Karl Wilmanns was dismissed by the Nazi authorities. Kuttner returned to Berlin to continue his scientific work. He was informed of his dismissal and retirement by the responsible provincial administration and from the Uchtspringe state sanatorium on 8 August 1933 (Law on the Restoration of the Professional Civil Service, § 3, “non-Aryan descent”).

Kuttner’s marriage to Elisabeth Lucie Lorentzen, which was solemnized in Berlin in 1926, was divorced in 1939. Hans-Peter Kuttner was still listed in the Berlin address book in 1940 as a specialist in nervous diseases at Bayerische Strasse 6.

Further biographical details, especially Kuttner’s life from 1933, are still unknown. His father Leopold Kuttner (1866 to 1931) was one of Berlin’s leading gastroenterologists between 1905 and 1930, medical director of the I. Medical Clinic at the Rudolf Virchow Municipal Hospital, and chairman of the Society for Digestive and Metabolic Diseases during its groundbreaking 5th Conference in Vienna in 1925. Hans-Peter Kuttner’s twin sister, the doctor Dr. Greta Noah-Kuttner, was able to flee from Germany to England in 1939. 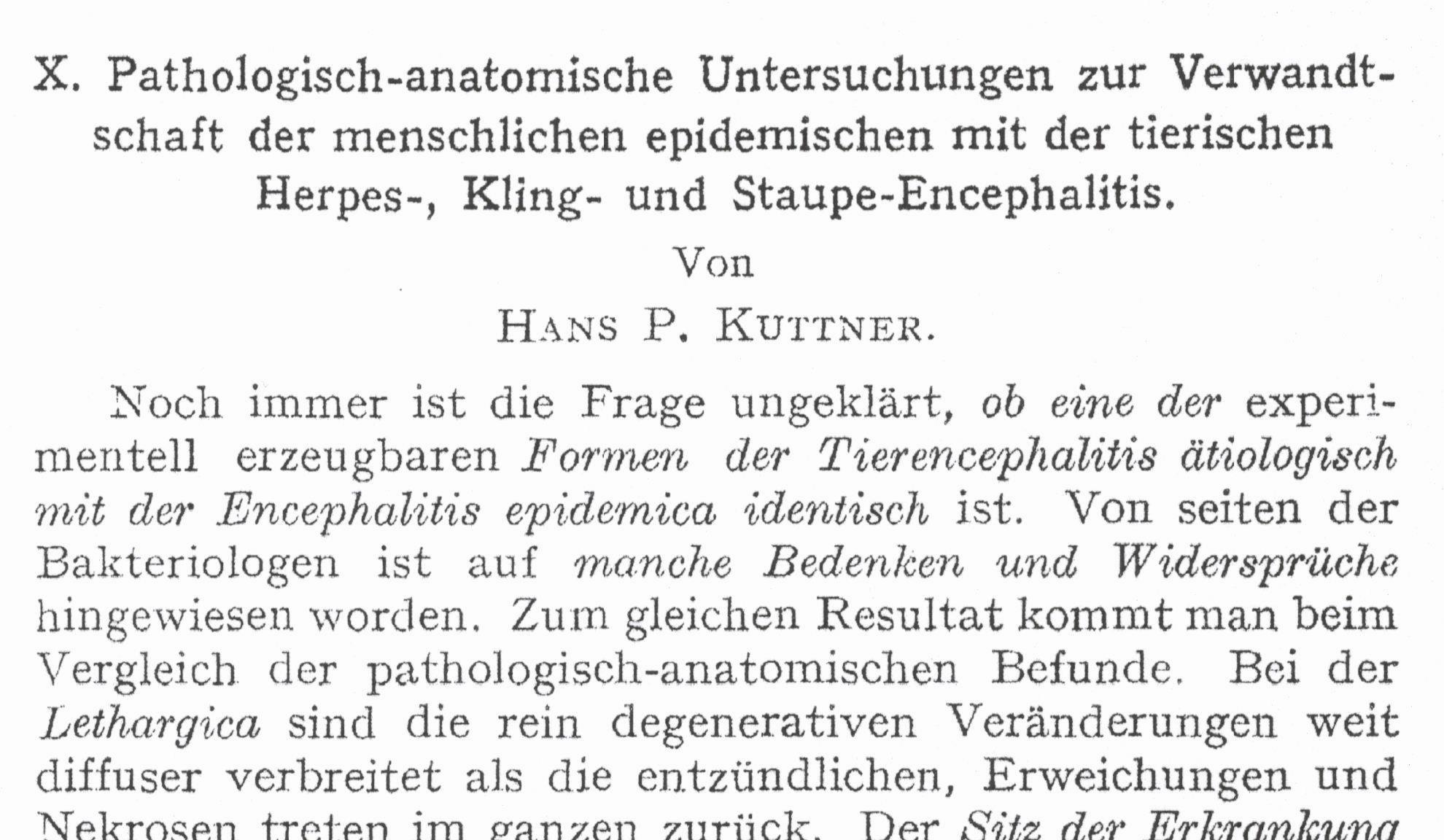 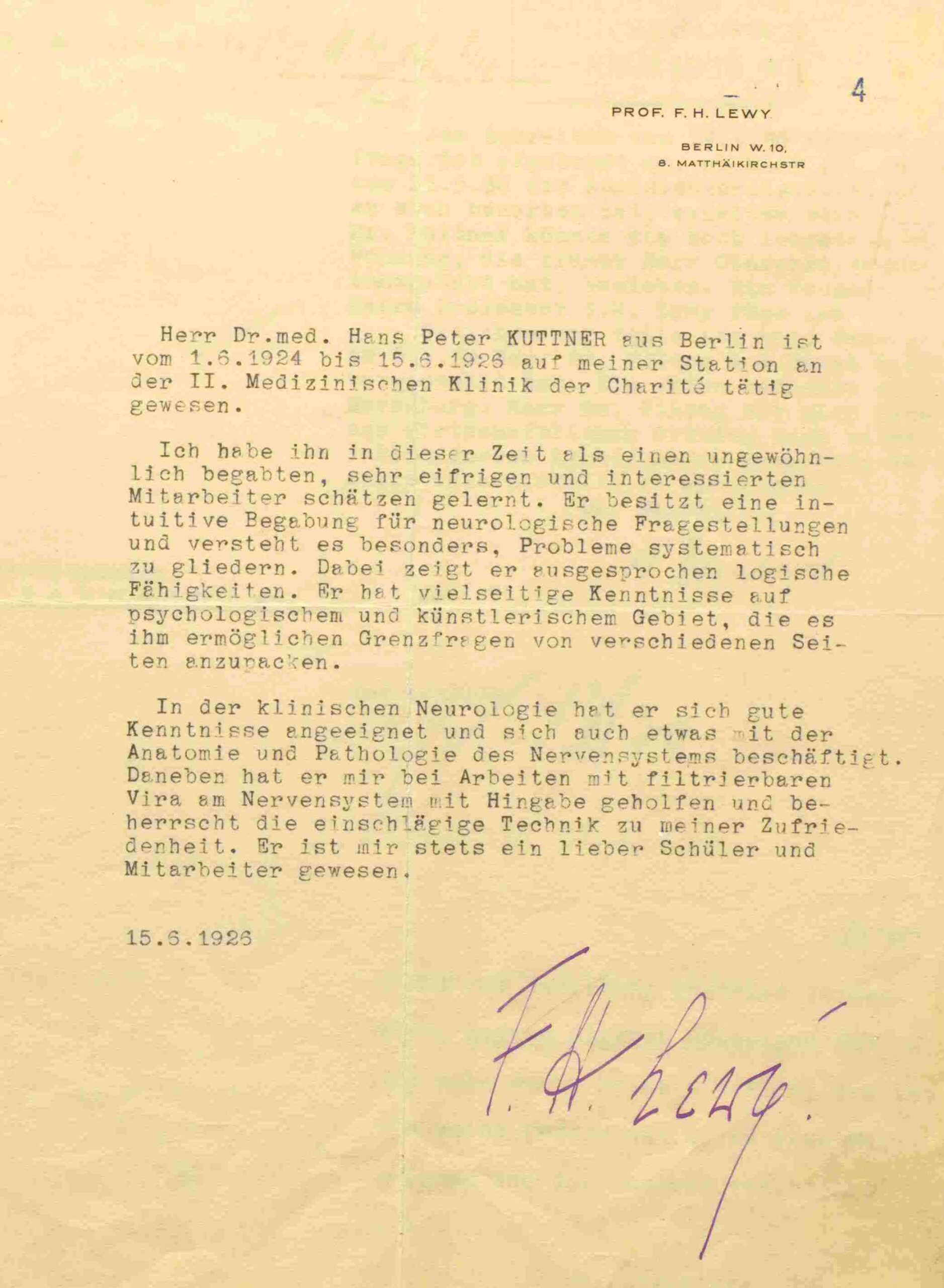 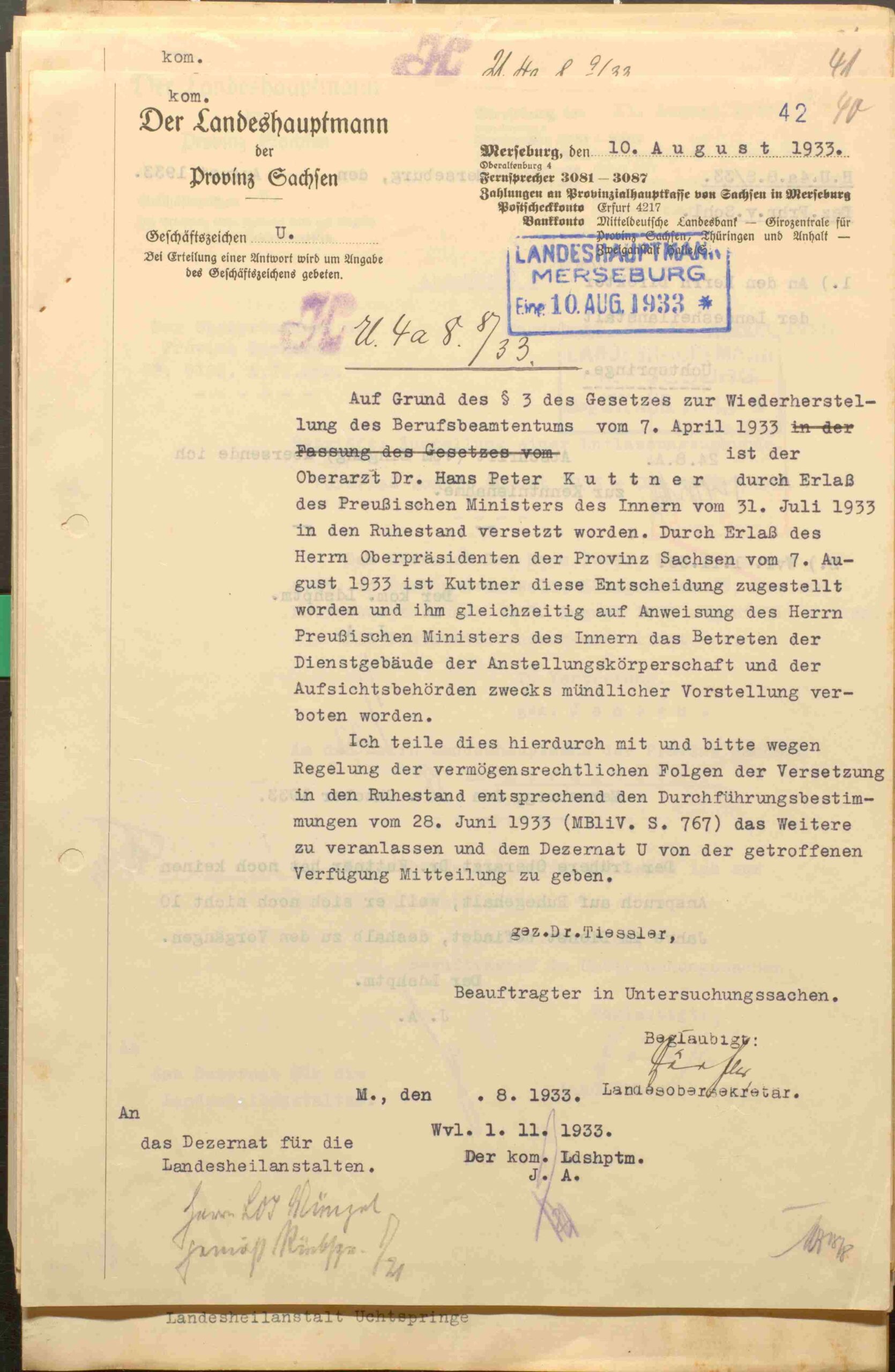