Studied in Würzburg and Berlin

Inventor of the Strauss cannula

Designated president
of the 1933 meeting, which
could not take place

Hermann Strauss was born in Heilbronn in 1868. He was the son of the merchant Heinrich Strauss and his wife Röschen, née Oppenheimer. Strauss received private tuition from the age of five, attended primary school, and then the Karlsgymnasium (today’s Theodor Heuss Gymnasium) in Heilbronn, from which he graduated in 1886.

Strauss studied medicine in Würzburg and, after having passed his medical exams, continued his studies in Berlin. He first met Hermann Senator, the medical director of the III Medical University Clinic of the Charité, during his studies in Berlin. Carl Anton Ewald’s course on digestive diseases left a lasting impression on Strauss. He received his doctorate from the Berlin University in August 1890 with the thesis “250 Fälle von Rechts- und Linksseitiger Hemiplegie, ein Beitrag zur Frage der functionellen Verschiedenheit beider Hemisphaeren”, which he had written under the neurologist Emanuel Mendel.

Hermann Strauss married Elsa Isaac in Berlin. Isaac was the daughter of the factory owner Julius Isaac and his wife Helene, née Simon, who in turn was the sister of the Berlin patron James Simon. After a visit to the USA, Elsa Strauss became deeply involved in hospital care in Berlin.

After passing his state examination and working briefly in the Polyclinic for Neurology at the Charité, Strauss began his training in internal medicine with Carl Anton Ewald at the Kaiserin-Augusta Hospital in Berlin. This is where he undertook his first work on gastrointestinal digestive physiology. He worked with Franz Riegel – a proven gastrointestinal specialist of the time – at the Medical University Clinic in Giessen from 1893 to 1895. Strauss returned to Berlin on 1 July 1895 and worked as an assistant and senior physician with Hermann Senator at the III Medical Clinic and Polyclinic of the Berlin Charité until 1905. Strauss was extraordinarily productive in terms of scientific research. He was mainly concerned with functional tests of the kidney and liver as well as diseases of the metabolism. His investigations into kidney function diagnostics through the determination of residual nitrogen in the blood, his introduction of the low-salt diet into practice, the description and introduction of the Strauss cannula for uncomplicated venous blood sampling, the technical development of recto-sigmoidoscopy, and the presentation of the laevulose sample as a liver function test all fall into this period. Later he devoted himself to diabetes mellitus, dietary therapy and the use of insulin.

With the Strauss cannula he created the prerequisite for the later “mass” laboratory chemical blood analyses and the basis for simple venous access for infusion therapy in 1898. The Strauss recto-sigmoidoscope, which for the first time offered the possibility of air insufflation and thus represented an important innovation in the diagnosis of rectal diseases, was presented in the ‘Berliner Klinische Wochenschrift’ in 1903.

Strauss habilitated in internal medicine at the medical faculty of the Friedrich-Wilhelms University in Berlin (now the Humboldt University in Berlin) with his work “Über die Bedeutung der functionellen Diagnostik für die Therapie der Magenkrankheiten” on 25 May 1897. He was appointed professor (extraordinarius) at the Berlin University in September 1902. After an interim period with his own practice, outpatient clinic and a small private clinic, Hermann Strauss took up the post of head physician at the Department of Internal Medicine at the Jewish Hospital in Berlin-Mitte in Auguststrasse on 3 February 1910. Strauss fundamentally restructured the department, continued the hospital’s advancement and took a very active part in planning and designing the new building of the Jewish Hospital, which was inaugurated in the Wedding district (today Heinz-Galinski-Strasse 1) in the summer of 1914.

Strauss, just like many of his fellow citizens, was patriotic and loyal towards the Kaiser at the beginning of the First World War. He provided his services to the military without hesitation, set up a special hospital for gastrointestinal patients and acted as a consultant to other hospitals. He formulated principles for the treatment, care, and assessment of those who had suffered renal diseases during the war for the Ministry of War in 1917/18, and published the paper “Magenkrankheiten durch Kriegseinwirkungen”.

For Strauss, the period after the First World War was marked by the effort to continue his scientific work despite many financial bottlenecks and limitations, as well as encouraging his medical staff to evaluate the experience and results gathered in the clinic. He himself published widely, was co-editor of the “Archiv für Verdauungs-Krankheiten”  from 1910, and published the “Sammlung zwangloser Abhandlungen aus dem Gebiet der Verdauungs- und Stoffwechselkrankheiten” in succession to Albert Albu.

In his autobiographical notes, Strauss described how, from the spring of 1933 onwards, “the concept of collegiality was tied to the concept of race”. Strauss was the designated chair of the XII. congress of the (D)GVS in September 1933. He had prepared a detailed and complete congress programme. The executive committee of the scientific society was forced to resign on 29 April 1933 under pressure from the National Socialists, as the Jewish doctors felt called upon to “resign” from the medical professional associations  due to “being of foreign race”, as Strauss stated in retrospect. In April 1933, five of the six board members of the professional association were “non-Aryan” as per Nazi terminology. The 1933 congress was cancelled and was held together with the annual congress of the German Society for Internal Medicine in 1934. Carl Hegler from Hamburg temporarily took over the chair of the (D)GVS. The professional association was saved from dissolution by the initiative of individual members.

Hermann Strauss worked as Medical Director of the Department of Internal Medicine at the Jewish Hospital in Berlin until 1942. He did not seize the opportunities to leave Germany. He participated in an aid committee of Jewish physicians that supported doctors willing to emigrate and wanted to prepare them for working abroad. Committee members, including Hermann Strauss, were imprisoned for several days in July 1933. His licence to teach at the Berlin University was revoked in 1934. Strauss experienced the increasing disenfranchisement, humiliation and persecution of Jews in Germany in the following years.

Deportation to the Theresienstadt/Terezín ghetto 1942

By order of the Gestapo, the entire assets of Hermann and Elsa Strauss were confiscated by the Berlin Chief Finance President at the end of July 1942. The couple had to report to the deportation collection camp at Grosse Hamburger Strasse 26 in Berlin on 29 July 1942. Two days later they were deported to the Theresienstadt ghetto as part of the 34th “Alterstransport” (transport of elderly Jews) on 31 July 1942. Strauss had been a member of the “Council of Elders” in the ghetto since 01 October 1942 and was active in the ghetto’s health service. He organised regular lectures on medical topics for the very large number of doctors imprisoned at the ghetto, helped where he could, and acted as a consultant.

Hermann Strauss died of a heart attack at the Theresienstadt ghetto on 17 October 1944 at the age of 78. His wife Elsa experienced the liberation of the ghetto in May 1945, but died of the consequences of imprisonment in June 1945, before she was able to leave the ghetto. Elsa Strauss’ gravesite is located at the large Jewish cemetery in Theresienstadt.

Hermann Strauss lost his brother, Dr. med. Josef Strauss, a specialist in gastrointestinal diseases in Frankfurt am Main, and his sister Eva Edel, Berlin, who had both also been deported to Theresienstadt and died at the ghetto in autumn 1942.

Hermann and Elsa Strauss’ daughter Edith fled to England in 1939. She died in London in 1975. Their son, Dr. jur. Walter Strauss, survived the Holocaust and was an influential state secretary in the German Federal Ministry of Justice from 1949 to 1963.

We are especially grateful to Mrs. Irene Hallmann-Strauss for the many conversations we have had since 2009, as well as for providing us with all the documents from the Strauss family archives. 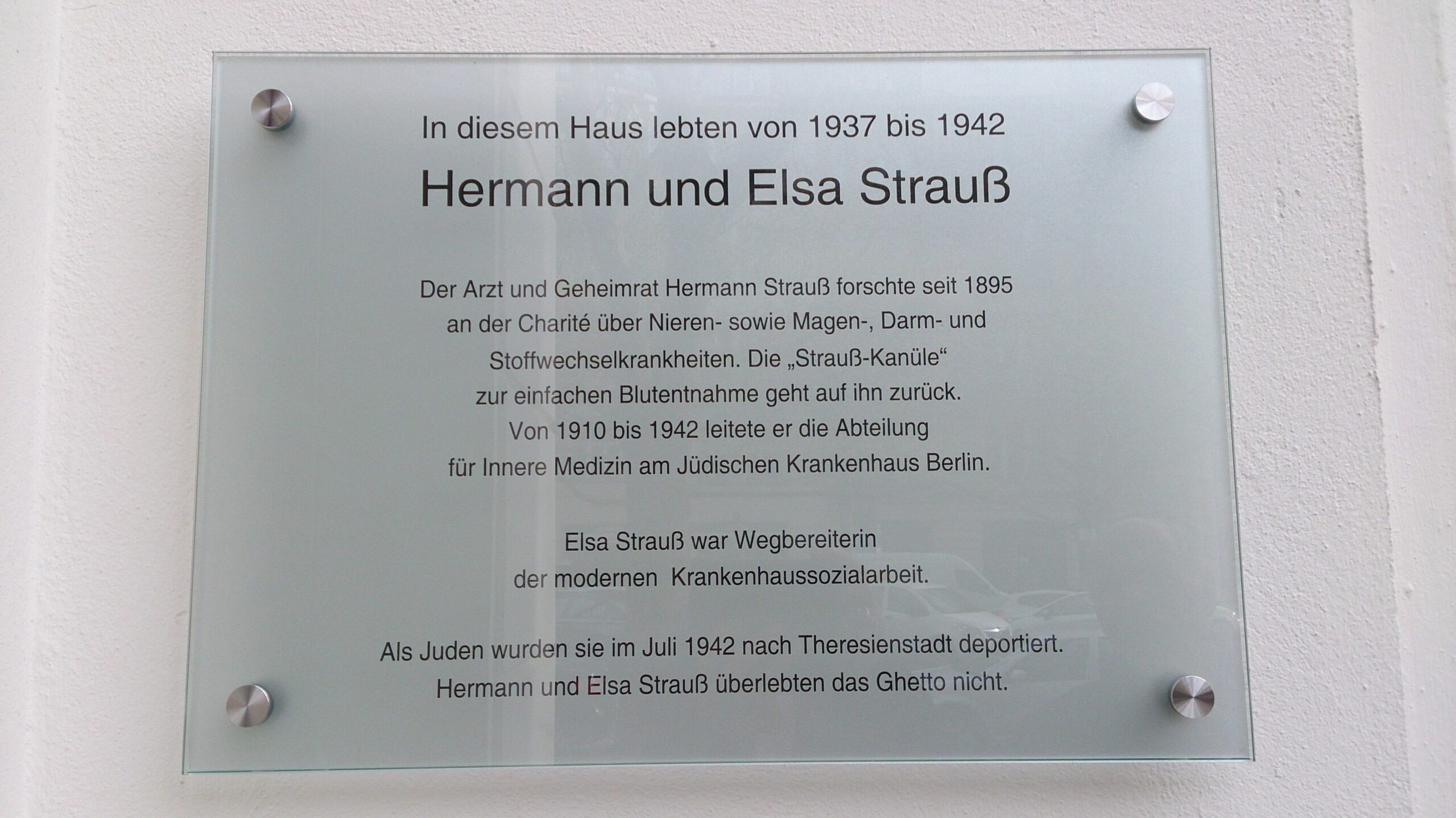