Member since 1925 as radiologst and internist

Escape to the Netherlands in 1938

Unlear circumstances of death in Amsterdam in December 1942

After graduating from the royal Catholic Grammar School at the Apostel church in Cologne, which could also be attended by Jewish pupils, Oskar David studied in Heidelberg, Munich, Kiel, Erlangen, and at the Rheinische Friedrich-Wilhelms University in Bonn from April 1901, where he passed the state examination on 16 February 1906. He completed his practical year at the Medical Clinic and the Institute for Hygiene at the University of Bonn.

He became an intern at the Medical Clinic of the Martin Luther University Halle-Wittenberg on 1 July 1907 under Adolf Schmidt, who was particularly interested in diseases of the large intestine, including ulcerative colitis.

David was one of those internists who was devoted to radiological diagnostics of the digestive tract from a very early stage and familiarised himself with the new examination method and technique. He published numerous papers on radiological diagnostics. He extended his investigations on the imaging of the duodenum with contrast materials to the entire small intestine.

He was admitted to habilitate at the Martin Luther University of Halle-Wittenberg in 1914. He had to postpone the habilitation process to serve as a military doctor in the First World War. He received several honours in the process.

He completed his habilitation in 1918 with the thesis “Röntgenologische Untersuchungen über Form und Verhalten des Dünndarms bei direkter Füllung mit Kontrastmitteln” at the University of Halle-Wittenberg, where he was appointed professor (extraordinarius) in 1922.

He was appointed head of the department of X-ray diagnostics at the Jewish Hospital in Frankfurt am Main the same year.

He lost his authorisation to teach in 1934.

His address is listed in the Reichsmedizinalkalender (Reich Medical Calendar) of 1937 as Bleichstrasse 72. He was still listed in the Frankfurt telephone directory with this address in 1938.

Escape to the Netherlands in 1938

Oskar David, who lived alone, left Frankfurt am Main in the spring of 1938 and sought refuge in the Netherlands. He was first registered, or recorded in the resident registration card, in Amsterdam on 26 March 1938. He temporarily lived in the small community of Blaricum, North Holland from 25 May 1938. He returned to Amsterdam on 20 October 1939.

The GESTAPO applied for his expatriation in September 1939, due to David’s alleged tax debts and “behaviour detrimental to the people”. Oskar David’s German citizenship was revoked on 27 December 1939.

There is no further documentation of David’s life after escaping Germany in March 1938, apart from his home addresses in the Netherlands.

Oskar David died in Amsterdam on 5 December 1942 at the age of 62. The circumstances of his death are still unknown. 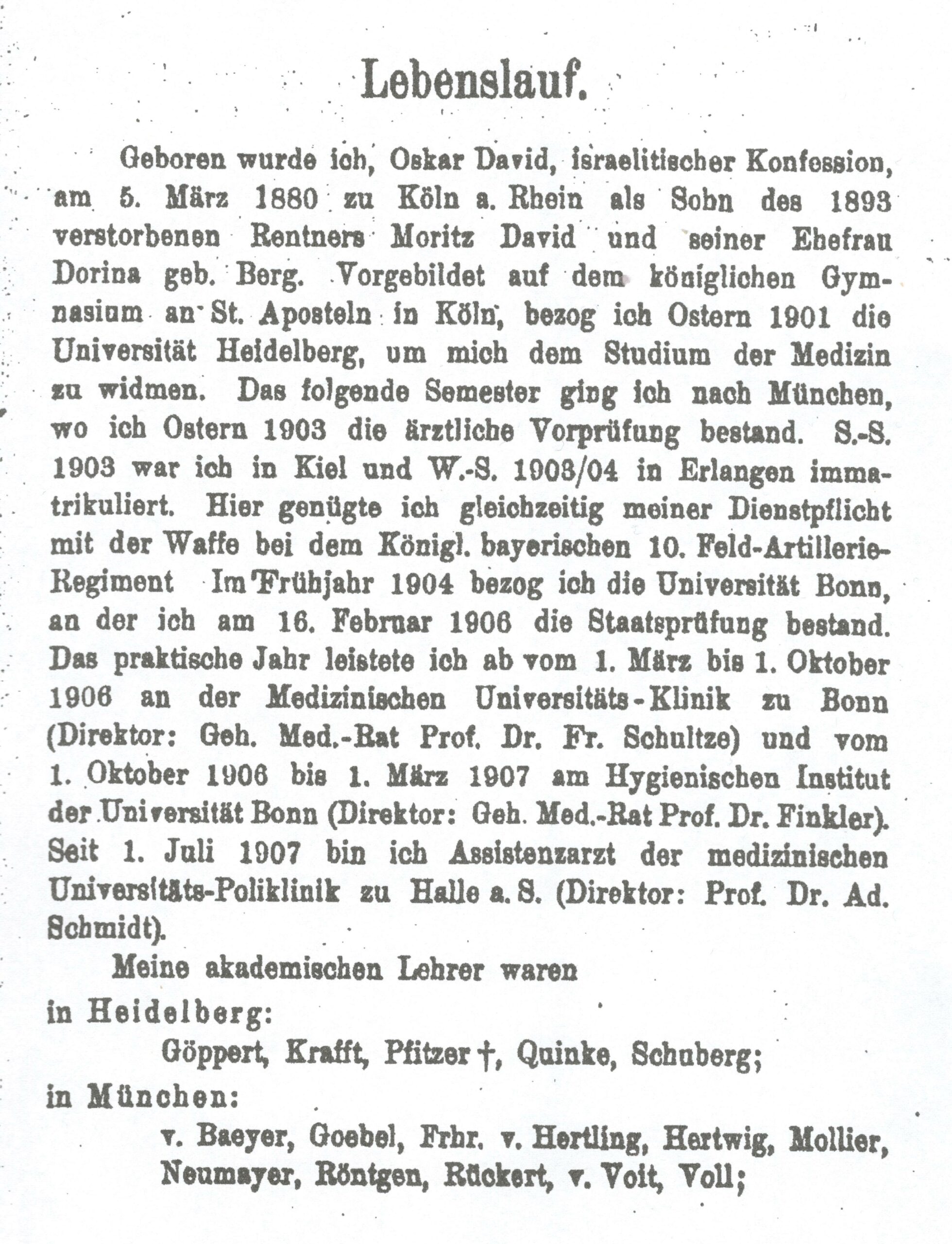