Ludwig Pick was born in Landsberg an der Warthe/Gorzów in 1868 as the son of the merchant Hermann Pick and his wife Beatrice, née Schoenflies.

After attending school in Landsberg, Ludwig Pick studied medicine in Heidelberg, Leipzig, Berlin, and Königsberg/Kaliningrad from 1887 and developed a special interest in pathological anatomy and histology from an early stage. Pick was influenced by the two pathologists Ernst Neumann and Cölestin Nauwerck in Königsberg.

After Pick had passed his state examination in Königsberg in 1892, he received his doctorate from the University of Leipzig the following year with the thesis “Ein Beitrag zur Aetiologie, Genese und Bedeutung der hyalinen Thrombose”. He completed his thesis under the Leipzig pathologist Felix Victor Birch-Hirschfeld. He worked at the Dr. Leopold Landauer’sche Frauenklinik in Berlin-Mitte from 1893 to 1906, first as an intern and later as head of the pathological-anatomical laboratory. Ludwig Pick habilitated in pathological anatomy at the Friedrich Wilhelm University in Berlin in 1899, following an expert opinion by Rudolf Virchow.

Pick was prosector and director of the Institute of Pathology at the Friedrichshain Municipal Hospital in Berlin from 1906. He was appointed “Titularprofessor” (senior lecturer) in 1909 and “Honorarprofessor” (honorary title) at the University of Berlin in 1921.

Pick actively participated in the First World War from 1914 to 1918 and received several honours.

Ludwig Pick enjoyed a great reputation both at the national and international level, and was a highly respected pathologist who worked in Berlin for more than four decades. He was extremely active scientifically and worked, among other things, on neuromas, pigments, nerve diseases, and lipoid metabolism. In addition, he dealt with questions in the field of gynaecopathology. He was the first to describe Niemann-Pick disease and undertook pioneering work in the field of new histological techniques.

Pick was invited to lecture in New York before the First World War. He delivered the “Harvey Lecture” in London in 1932 and the “Dunham Lecture” in Boston at Harvard Medical School the same year.

Numerous scientists and physicians from various countries temporarily sat in and worked with Ludwig Pick. These included the internist and pathologist Eli Moschcowitz and the later gynaecologist Robert Tilden Frank from Mount Sinai Hospital New York.

Pick was offered an appointment as a pathologist at the University of Chicago in 1933, which he declined.

Ludwig Pick was dismissed from his post as director of the Institute of Pathology at the Berlin-Friedrichshain Municipal Hospital in 1933 and was forced to retire. His authorisation to teach at the University of Berlin was revoked on 19 October 1935. Pick worked as head of the department of pathology at the Jewish Hospital in Berlin from 1939. From this time, he had to use the designation “Krankenbehandler” for pathology (Nazi term for Jewish doctors allowed to treat Jews only).

Deportation to Theresienstadt/Terezín ghetto in 1943

Pick was deported from Berlin (Transport I/96) to the Theresienstadt/Terezín ghetto on 17 June 1943.

Ludwig Pick died as a result of his imprisonment at the ghetto on 3 February 1944 at the age of 75. 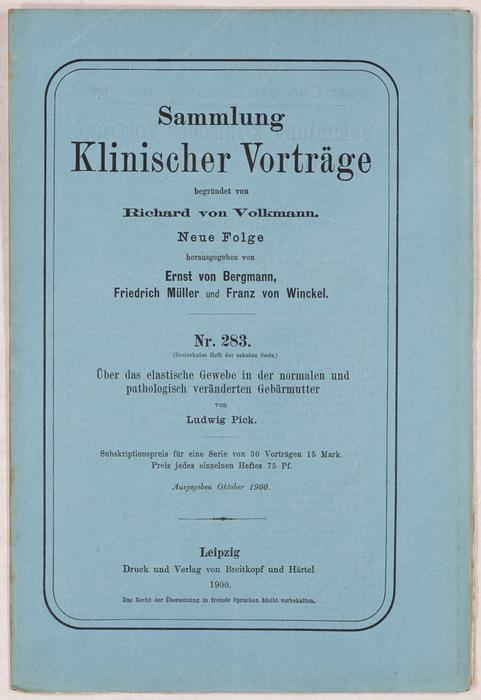