Leading gastroenterologist in the USA after 1934

Co-founder of the
predecessor organisation
of the ASGE

“I, Rudolf Schindler, of Jewish faith, was born in Berlin on 10 May 1888 as the son of the banker Isidor Schindler. I attended the Königliches Wilhelmsgymnasium (royal grammar school) in Berlin, where I obtained my school-leaving certificate on Michaelmas 1905,” Schindler states in the curriculum vitae of his dissertation. His mother was Martha Schindler, née Simon, who was artistically gifted and encouraged her son’s interest in music and languages from an early age.

Schindler studied medicine in Freiburg and Berlin. He passed the state examination at the University of Berlin in December 1910 and was awarded his doctorate in March 1912 with the thesis “Ein Fall von Fall von Meningocele spuria traumatica kombiniert mit Pachymeningitis haemorrhagica interna”, which he had written under the pediatrician Heinrich Finkelstein. He moved to Munich in November 1913 and worked as an assistant physician at the Institute of Pathology with Siegfried Oberndorfer, the first person to describe the carcinoid. This activity was interrupted by the First World War, in which Schindler actively participated in the medical service and received several awards. He began his training in internal medicine in 1919 with the metabolic researcher Otto Neubauer at the II Medical Clinic of the Munich-Schwabing Municipal Hospital.

Schindler’s experiences during the First World War with soldiers who suffered from gastric diseases, as well as his own illness, motivated him to study gastric pathology in great detail. Chronic gastritis thus became an important topic of research for Schindler.

The focus of his work was on questions of gastric diagnostics and his preoccupation with the further development of gastroscopy. In a future lecture, Schindler would report that he had found a previously unused oesophagoscope from the instrument developer and ENT specialist Wilhelm Brünings at the Schwabing Clinic, which had inspired him to work intensively on endoscopy. He had already gained experience with a rigid gastroscope early on. Schindler had modified Hans Elsner’s rigid gastroscope to suit his own needs. He published an extensive article on the technique and problems of rigid gastroscopy in the ‘Archiv für Verdauungskrankheiten’ (“Boas-Archiv”) in 1922. Schindler’s pioneering textbook and atlas of gastroscopy was published the following year. The work was quickly met with national and international interest.

Schindler settled as a specialist in gastrointestinal diseases with a focus on endoscopy in Munich in 1924. In addition to his medical work, Schindler also directed the Munich Doctors’ Orchestra until 1933.

After meticulous preparatory work, Rudolf Schindler presented his semi-flexible gastroscope, which he had developed together with the Berlin instrument maker Georg Wolf (Wolf-Schindler gastroscope), at the Munich Medical Association on 6 July 1932. This device became the standard instrument for gastroscopy until the late 1950s. Around 1930, Schindler supported the ideas and experiments of the medical student Heinrich Lamm in Munich. The latter was working on experiments with glass fibre bundles for light transmission and image generation for endoscopes. However, Schindler concentrated on his own optical system with multiple lenses connected in series.

The Bavarian State Gazette still honoured Rudolf Schindler for the great innovation of the semi-flexible gastroscope as late as 25 February 1933.

Schindler had been subjected to repressive measures by the Nazi authorities since April 1933. Among other things, he was no longer allowed to conduct the Munich Doctors’ Orchestra. Schindler was taken into so-called protective custody following denunciation. He was held at the Munich central prison from 31 January to 6 April 1934 by order of the GESTAPO. In a letter from the Bavarian political police dated 12 March 1934, Schindler’s contribution to the development of the new gastroscope is challenged: “Dr. Schindler is not the inventor of the gastroscope, but has only promoted the idea of making the stomach accessible from the outside in recent years” (“Gestaposchutzakten” (protective files held by the Gestapo), Bavarian  State Archive). In addition, a gastroscopy course with international visitors that Schindler had planned for the beginning of March 1934 was taken as a reason to extend his “protective custody” until the beginning of April 1934 in order to “thwart atrocious news”.

Following persecution by the Nazi authorities, Schindler fled Germany with his family in the summer of 1934. They arrived in the USA from Antwerp, Belgium, aboard the S.S. Pennland on 27 July 1934. The family reached New York on 6 August 1934, from where they travelled on to Chicago. The Chicago-born doctor Marie Ortmayer (1884 – 1974), who worked for the gastroenterologist Walter Lincoln Palmer, had visited and interned with Schindler during a trip to Europe in 1924 and became interested in his gastroscope. She arranged the help of Walter L. Palmer and a circle of supporters in the USA as well as financial means. This enabled Schindler to obtain an entry visa, to work as a visiting professor from 1934, and associate professor from 1937 at the Frank Billings Medical Clinic, Department of Medicine, University of Chicago.

Schindler collaborated with Marie Ortmayer and a circle of young gastroenterologists in Walter L. Palmer’s GI Unit. He quickly made his gastroscope popular in the USA and undertook research on gastric pathology. Schindler published his monographic work “Gastroscopy, The Endoscopic Study of Gastric Pathology” in 1937, which he dedicated to Marie Ortmayer. The work is, as it were, the sum of his work since 1920. This was followed in 1947 by the monograph ‘Gastritis’, which is based primarily on his research findings on the histopathology of the gastric mucosa.

Rudolf Schindler, his wife Gabriele, and his children Ursula and Richard were expatriated from the German Reich on 26 April 1939. Schindler was granted American citizenship on 3 July 1940.

He interrupted his stay in California from 1958 to 1960 to teach gastroenterology at the University of Minas Gerais in Belo Horizonte, Brazil. The 70-year-old specially learnt Portuguese for this stay. Schindler’s wife Gabriele died in March 1964. Rudolf Schindler returned to Germany the following year and married his childhood friend Marie (Mathilde) Koch, née Aumüller, who lived in Munich and with whom he had remained close throughout his life.

Schindler published a comprehensive and impressive review article on chronic gastritis in the ‘Klinische Wochenschrift’ in 1966.

Rudolf Schindler died in Munich on 6 September 1968 at the age of 80. A memorial plaque commemorating Rudolf Schindler’s biography and his lifetime achievements was hung in the entrance hall of the Munich municipal hospital in Schwabing in 2020 at the initiative of the DGVS. 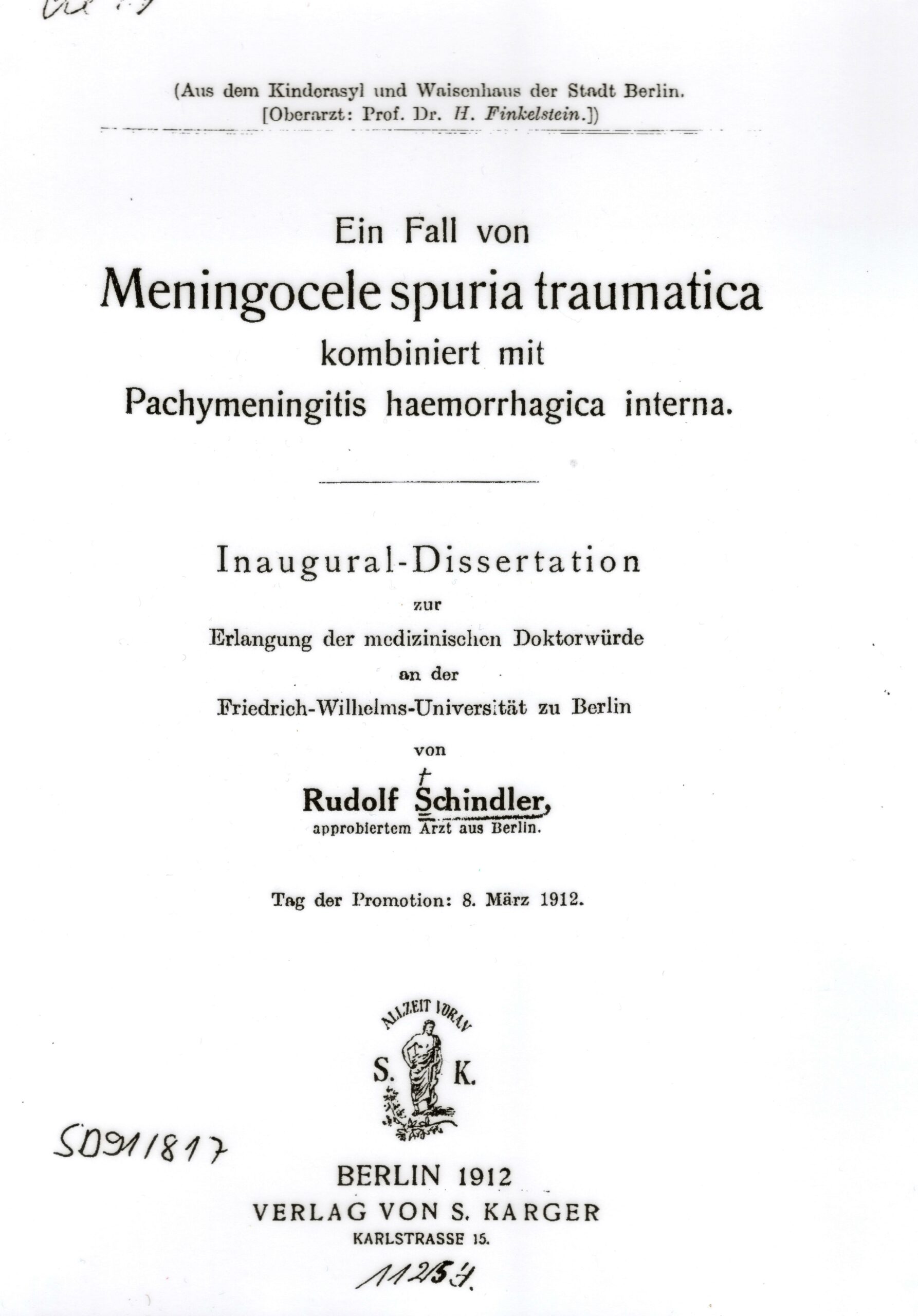 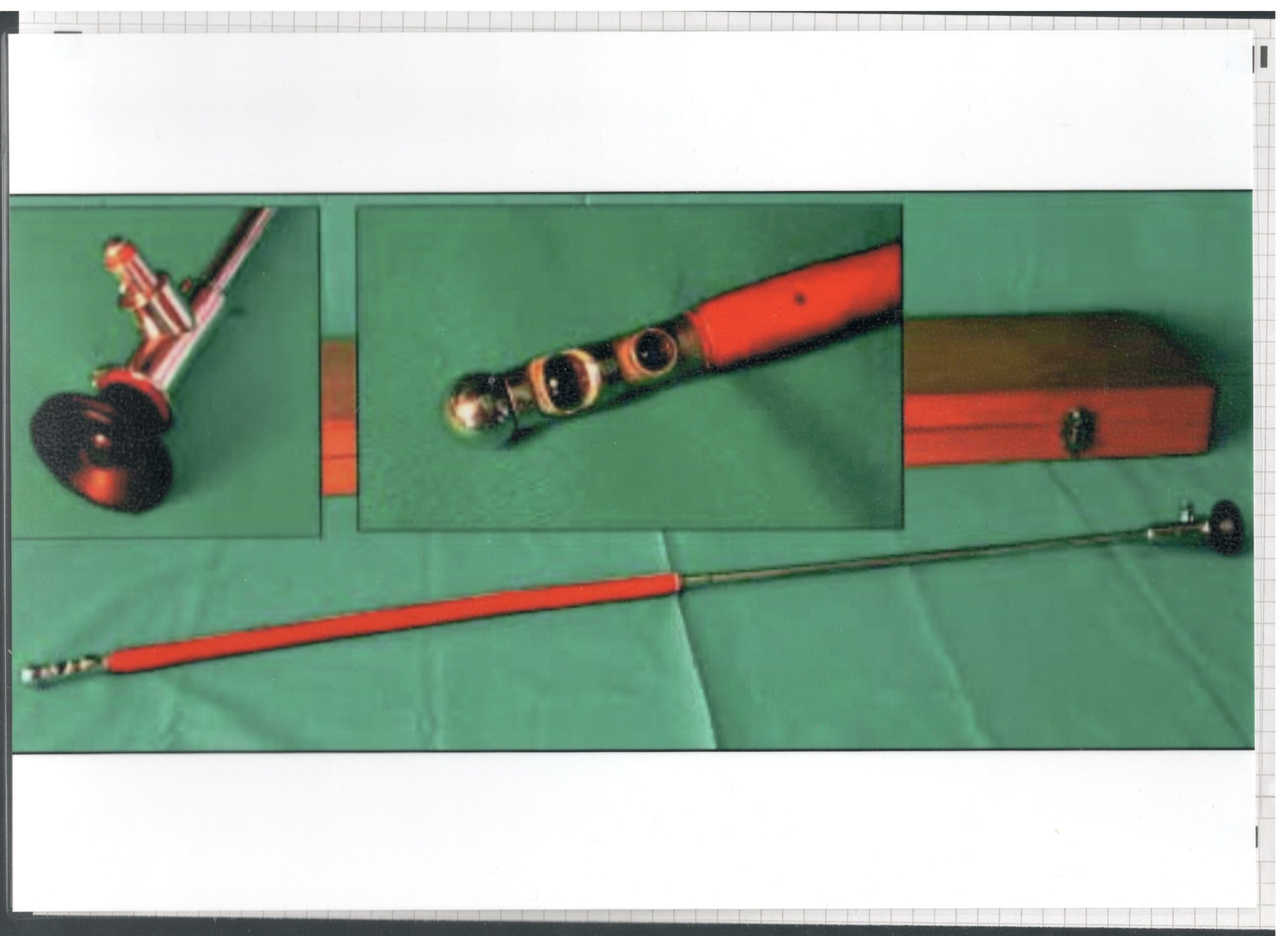 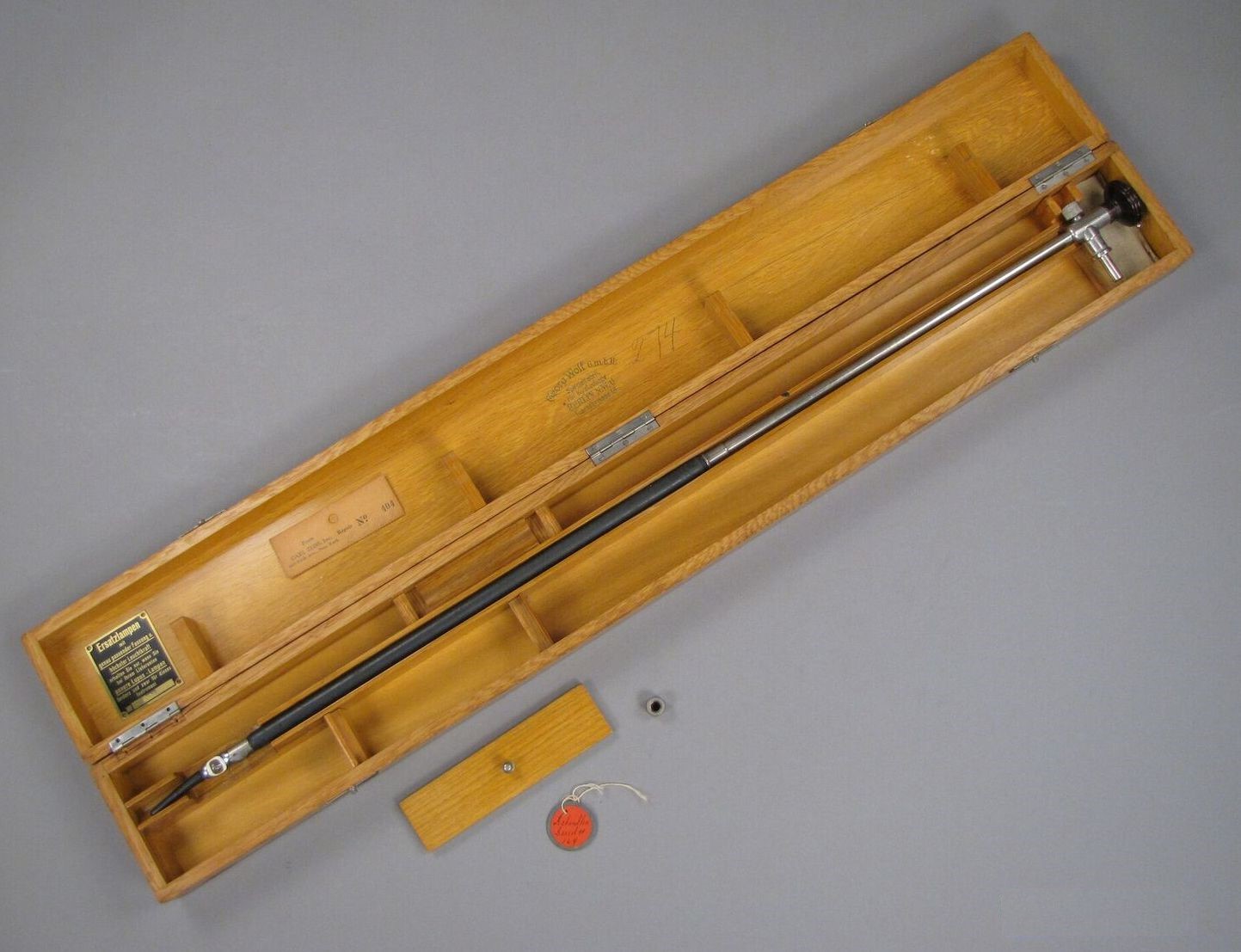 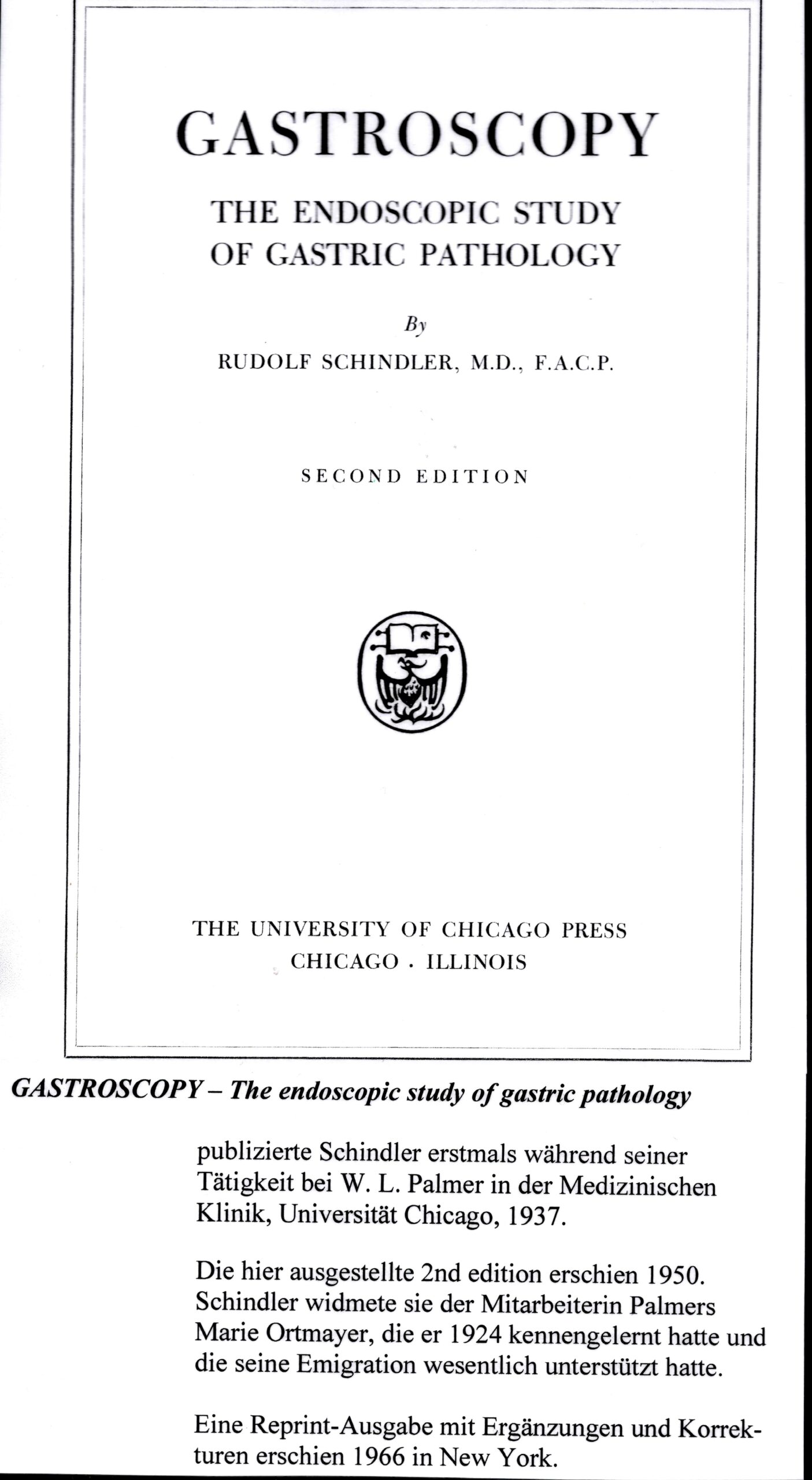 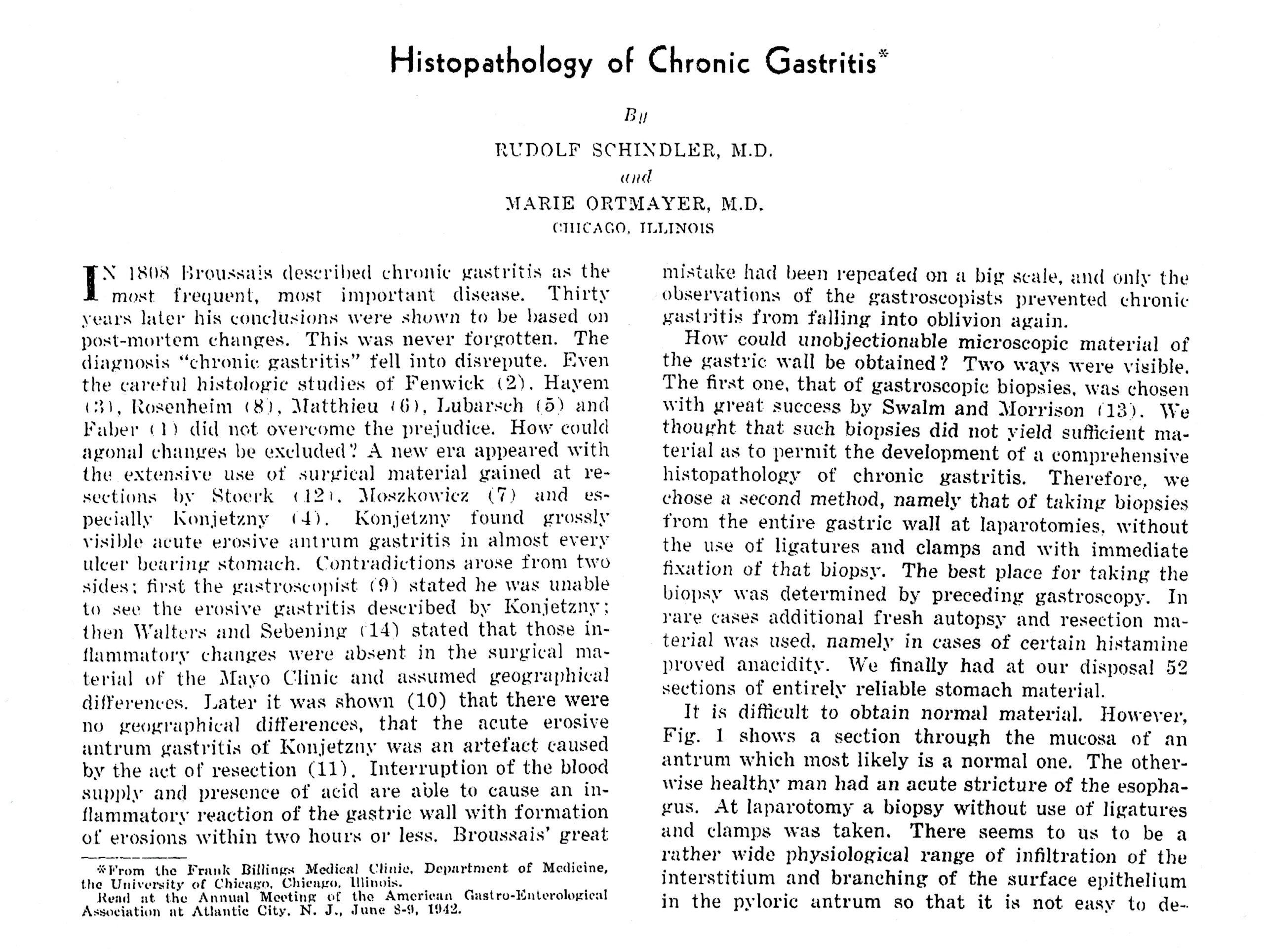 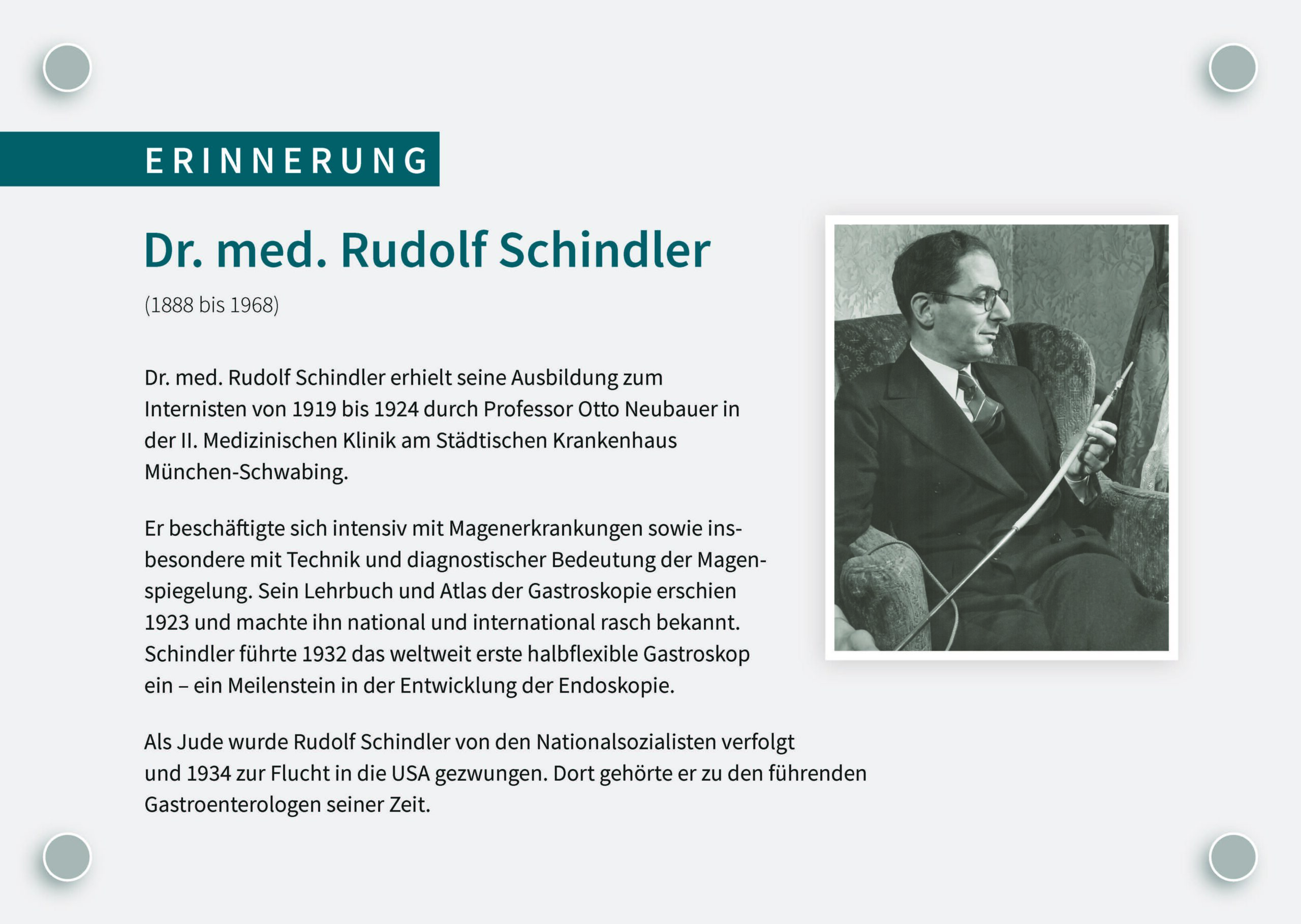