Initiator of the first (D)GVS Congress in 1914

Ismar Boas was born in Exin/Kcynia in in the former administrative district of Bromberg/Bydgoszcz, Poland in 1858 as the son of the merchant Hermann Boas and his wife Rosette, née Moses. He attended secondary school in Nakel an der Netze/Naklo nad Notecią, Poland, and after the family had moved, he attended grammar school in Züllichau/Sulechów, Poland, where he passed his school-leaving exam in 1877.

Boas studied medicine for six semesters in Berlin. He was impressed by the 30-year-old tutor  Carl Anton Ewald, who lectured on digestive diseases and undertook research in the field of gastrointestinal physiology at the University of Berlin. Ewald would later be formative for Boas’ further career. Boas moved to the University of Halle in 1880, and wrote his dissertation “Ein Beitrag zur Lehre von der paroxymalen Hämoglobinurie” at the suggestion of Theodor Weber, the director of the University Medical Clinic. He passed the doctoral examination in 1881 and then moved to the University of Leipzig, where he passed the state exam in 1882.

After passing his exams and obtaining his licence to practise medicine, Boas returned to Berlin, set up as a general practitioner in an outlying district of Berlin, and resumed his earlier contact with Carl Anton Ewald. Boas became Ewald’s “private secretary” and “silent assistant editor” for the prestigious ‘Berliner Klinische Wochenschrift’, of which Ewald was the editor. Boas also researched gastric functions together with Ewald and published his first articles on the physiology and pathology of digestion in the ‘Archiv für Pathologische Anatomie und Physiologie und Klinische Medizin’ (Virchow Archive) in 1885 and 1886. Boas never underwent clinical training, but acquired his knowledge through intensive self-study. He consistently continued his education in inorganic and organic chemistry as well as in the analytical methods possible at the time. He was awarded a professorship based on his merits in Berlin in 1907 and was granted the honorary title “Geheimer Sanitätsrat” (privy health councillor) in 1914.

The Founding of Gastroenterology

Ismar Boas opened a practice in Berlin’s Friedrichstrasse in 1886 and referred to himself on his practice sign as a “specialist physician in gastric and intestinal diseases”. His practice was linked to a polyclinic for gastric and intestinal diseases with its own laboratory. Boas managed to establish the new field of gastroenterology around the world with this “one-man show”. Boas’ move into consistent specialisation was controversially received. His mentor Carl Anton Ewald – himself a pioneer of gastroenterology – rejected the move into the speciality, fearing that it would split the unity of internal medicine and fragment it. Adolf Kussmaul was also sceptical about Boas’ aspirations. Despite all opposition, Boas persistently pursued his goal of furthering the scientific and organisational development of gastroenterology with tireless diligence and the highest level of commitment. He quickly achieved national and international attention through his specialist contributions.

His work “Allgemeine Diagnostik und Therapie der Magenkrankheiten nach dem heutigen Stand der Wissenschaft”, which he dedicated to his mentor Carl Anton Ewald, was published in 1890. This was followed by the second volume, “Specielle Diagnostik und Therapie der Magenkrankheiten” in 1893. Both volumes had nine editions by 1925 and were translated into other languages. He held targeted training courses in the new field of gastroenterology in Berlin and shaped the first generations of early “gastrointestinal physicians”. He tirelessly advocated the discipline, a high scientific level, openness to new developments, and critical examination thereof. Boas published countless articles on individual topics: For example, he introduced the term ulcerative colitis in Germany in 1903 and published the book “Lehre von den okkulten Blutungen” in 1914. He had recognised the diagnostic value of the X-ray method for visualising the gastrointestinal tract, as well as the potential of gastroscopy, which was still technically imperfect at the time, from an early stage.

In his two theoretical writings “Grundlinien der therapeutischen Methodik in der Inneren Medizin”, 1909, and in “Therapie und Therapeutik, Ein Mahnruf an Ärzte, Kliniker und Pharmakologen”, 1930, he anticipated today’s principles of evidence-based medicine with his demands for critical and controlled review of new methods and drugs.

In 1895, the 37-year-old Boas founded the first specialist journal for gastroenterology, the ‘Archiv für Verdauungs-Krankheiten mit Einschluss der Stoffwechselpathologie und der Diätetik’, the first volume of which was published by Samuel Karger in 1896. Boas worked as the journal’s editor. He edited it until 1933 and found a circle of co-editors who were among the leading gastroenterologists in Europe and the USA at the time. The 54 volumes of the ‘Archiv für Verdauungskrankheiten’ 1896 to 1933 are a tribute to Boas’ lifetime achievements. Here he set down his fundamental statements on “gastrointestinal specialisation” and with the “Boas Archive”, created a forum for the dissemination of specialist knowledge from the fields of gastroenterology, hepatology and metabolic research.

Boas was very committed to establishing a specialist society for digestive and metabolic diseases. He consistently campaigned for this, despite much resistance. Together with the intestinal specialist Adolf Schmidt from Halle, and with Hugo Starck from Karlsruhe, who dealt with oesophagus and gastric diseases, and with  Carl Anton Ewald from Berlin – who had come around in the mean time – Boas succeeded in organising the first Conference for Digestive and Metabolic Diseases in Bad Homburg in April 1914 with the help of the dietary specialist Curt Pariser from Bad Homburg. The First World War interrupted the planned further conferences and international connections. The second congress therefore did not take place until September 1920. The conference took place in Bad Homburg with Boas as the conference chairman delivering a keynote speech. The new association saw itself as explicitly interdisciplinary and supranationally European. Boas pleaded for close cooperation with surgeons, pharmacologists and theoretical researchers such as physiologists and biochemists. These goals explain the diversity in the membership of the “Fachgesellschaft für Verdauungs- und Stoffwechselkrankheiten” (Scientific Society for Digestive and Metabolic Diseases), which was formally founded during the 5th meeting in Vienna at the end of September 1925 with a constitution, rules of procedure and a first list of members (initially 150 members). One year later, the number of members had doubled to 306.

Ismar Boas was appointed the first honorary member of the society in 1927, in recognition of his immense achievements.

Boas was forced to give up the editing of the ‘Archiv für Verdauungs-Krankheiten’ in late 1933 due to Nazi legislation. He experienced the increasing anti-Jewish measures by the ruling National Socialists, his own disenfranchisement and humiliation. The number of his patients in his Berlin practice had decreased significantly.

After 54 years of extensive and pioneering work in Berlin, Boas was forced to leave Germany. He fled to Vienna in May 1936 with his wife Sophie, née Asch. Nevertheless, he still harboured hopes of returning to Germany at this time. His former student Walter Zweig supported him in Vienna to the best of his ability. There was, however, no more hope, when the German Wehrmacht invaded Austria in March 1938.

Ismar Boas took his own life in Vienna on 15 March 1938, just before his 80th birthday.

His grave site is located at the Jewish Cemetery Berlin-Weissensee and has been maintained by the DGVS since 1992. His wife Sophie Boas, née Asch, had arranged for his burial in her family’s grave in Berlin. She herself fled to the Netherlands via Switzerland in 1938. Sophie Boas was deported to the Sobibor extermination camp in March 1943, where she was murdered. Their son Kurt Ferdinand Boas had been a dermatologist in private practice in Crimmitschau, Saxony, since 1924. After being denounced, he was arrested by the National Socialists and was held at Sachsenburg concentration camp near Chemnitz from April 1935 to December 1936. According to current knowledge, he fled to Bogota, Colombia, in 1938. There is so far no record of his further biography. A commemorative plaque for Dr. Kurt Ferdinand Boas was unveiled at the house of his former practice in Crimmitschau on 9 November 2021. Boas’ daughter Klara Schneider was able to flee to the USA from Rotterdam together with her husband, the Berlin paediatrician Kurt Werner Schneider, on 7 January 1939. They reached New York on 16 January 1939. Klara Schneider died in New York in 1959. Neither of Boas’ children had any descendants.

A bronze plaque in memory of Ismar Boas was unveiled in the foyer of the former Clinic for Internal Medicine “Theodor Brugsch” at the Charité in 1992 following an initiative of the DGVS: “In memory of privy councillor professor of medicine Ismar Boas, the great researcher and teacher of gastroenterology”. The plaque, which had been removed in 2000 due to renovations, was rediscovered in the Charité’s depository in 2013 after a renewed initiative. It was put up at the entrance to the medical clinic specialising in gastroenterology and hepatology, Charité Mitte campus, Virchowweg 10.

The DGVS awards the Ismar Boas Medal and the Ismar Boas Prize for outstanding achievements in the field of gastroenterology during its annual congresses.

We are very grateful to Leonard Hoenig, USA, for his early comprehensive publication on the biography of Ismar Boas and for numerous contacts. 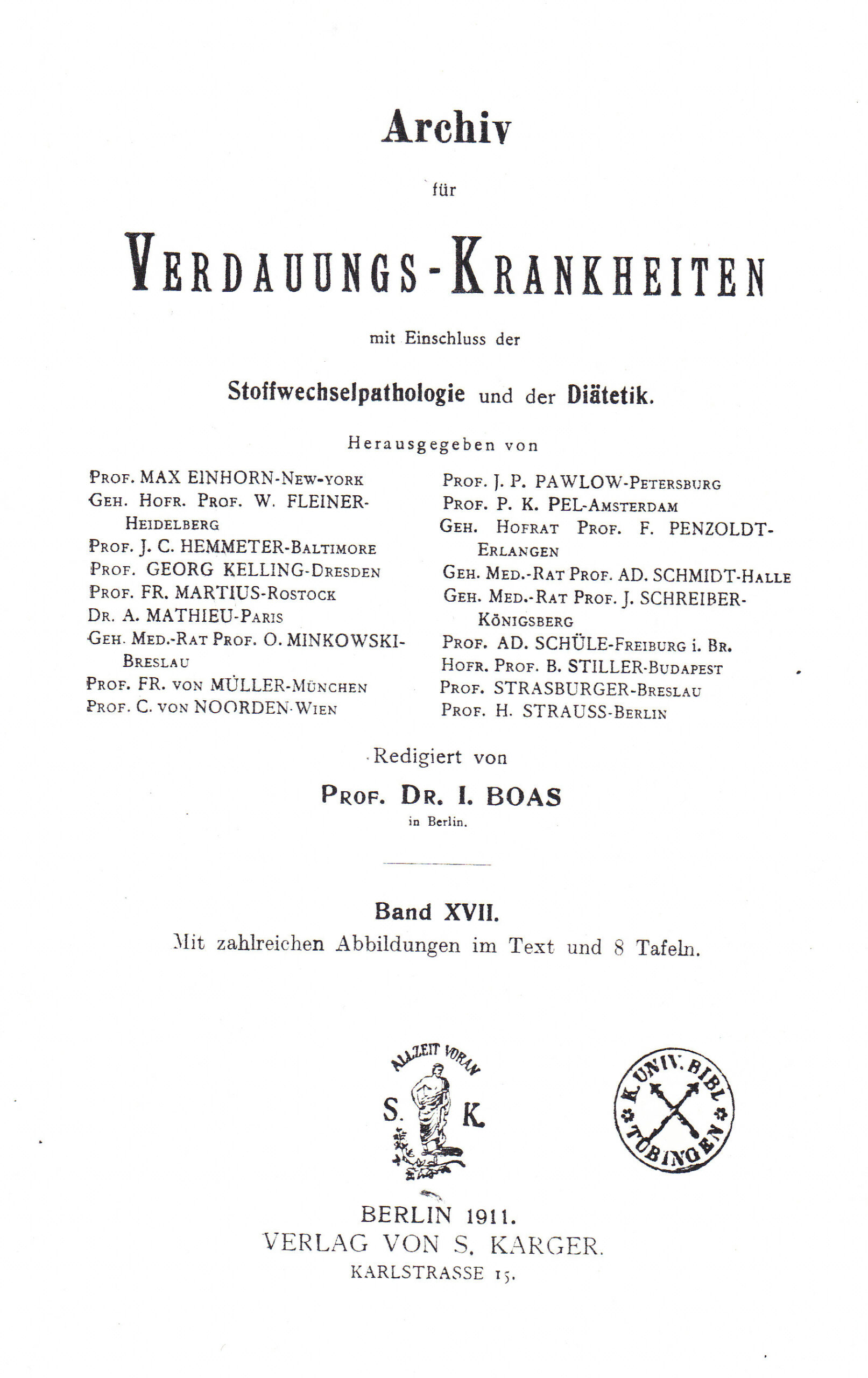 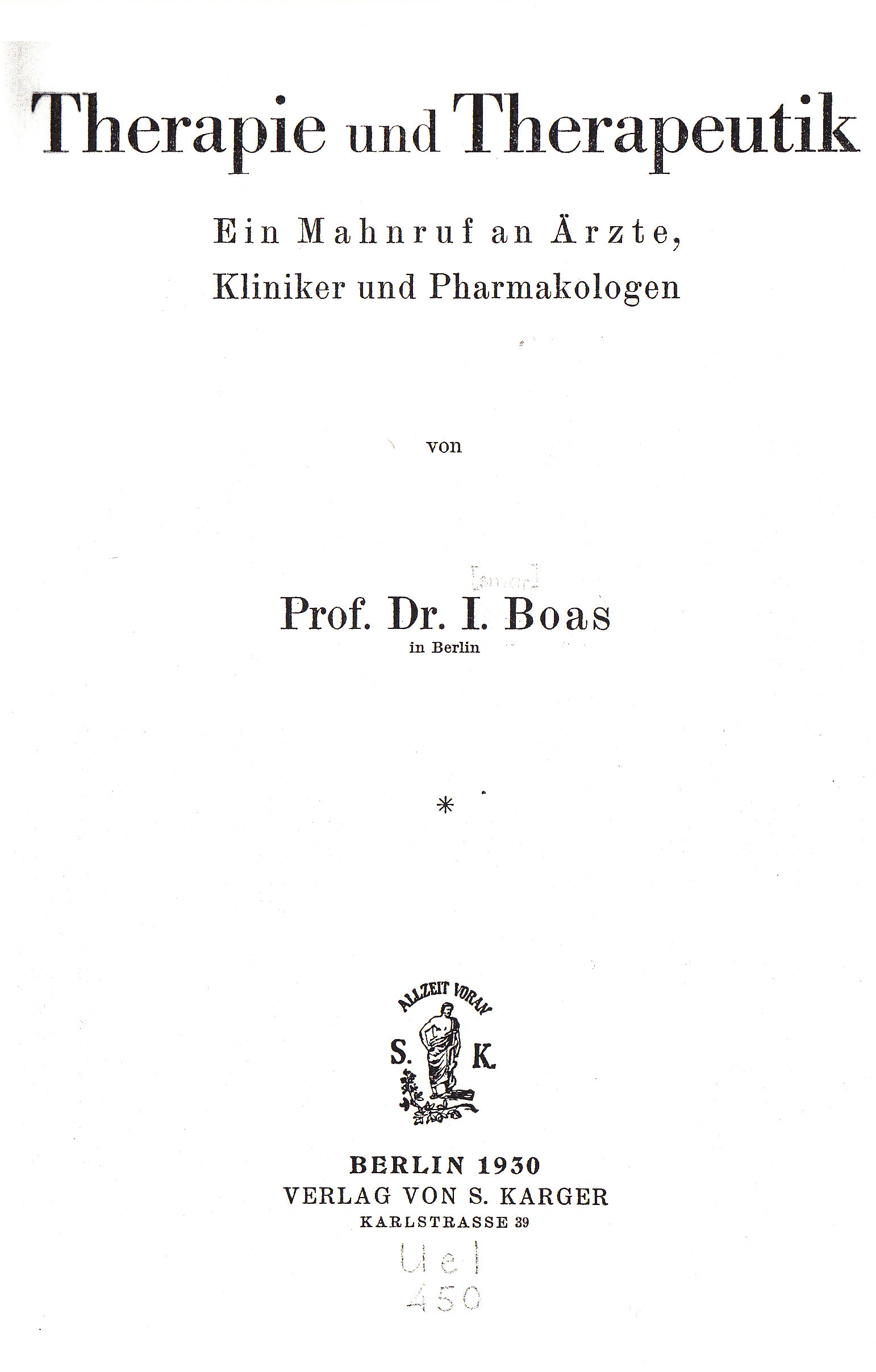 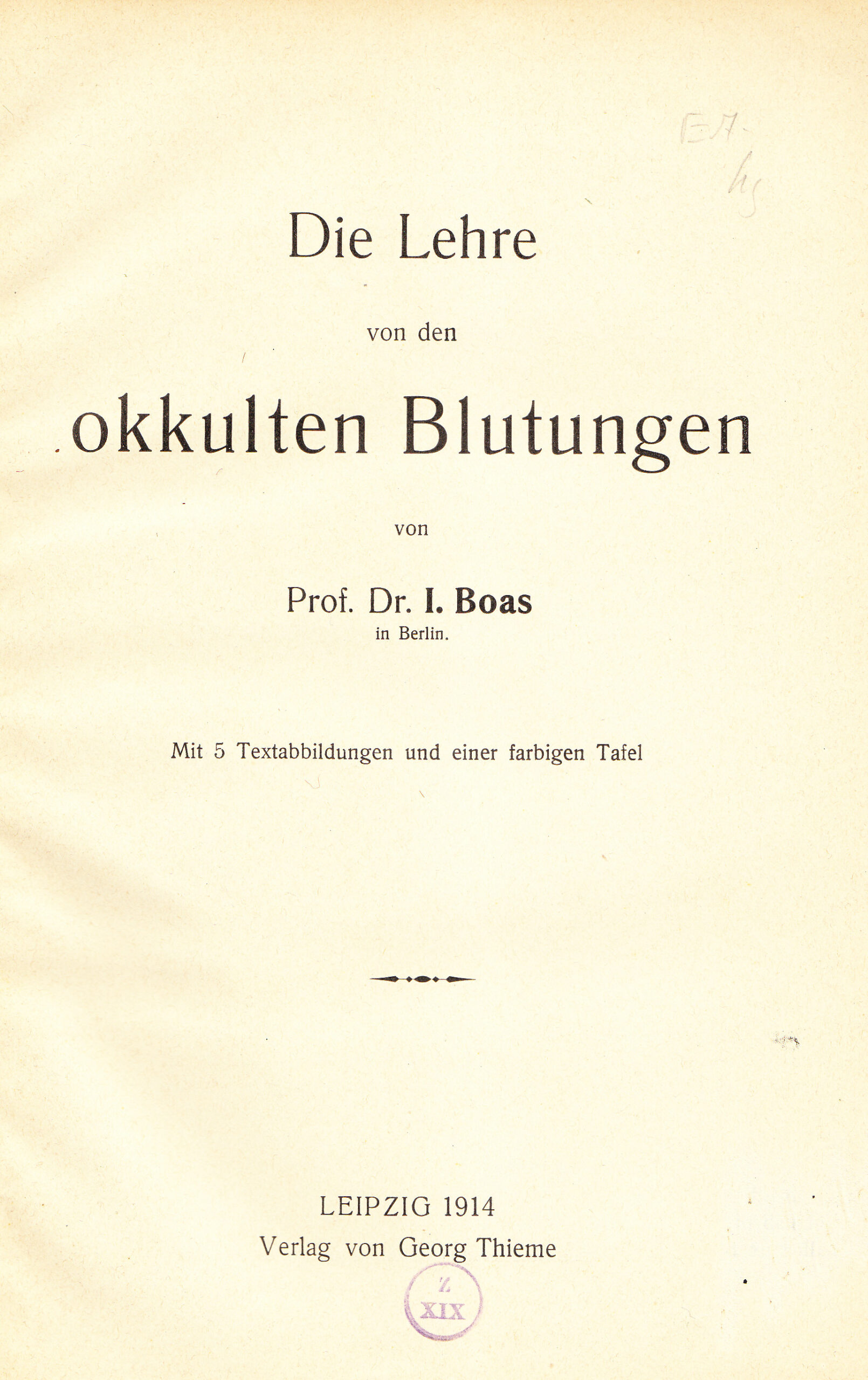 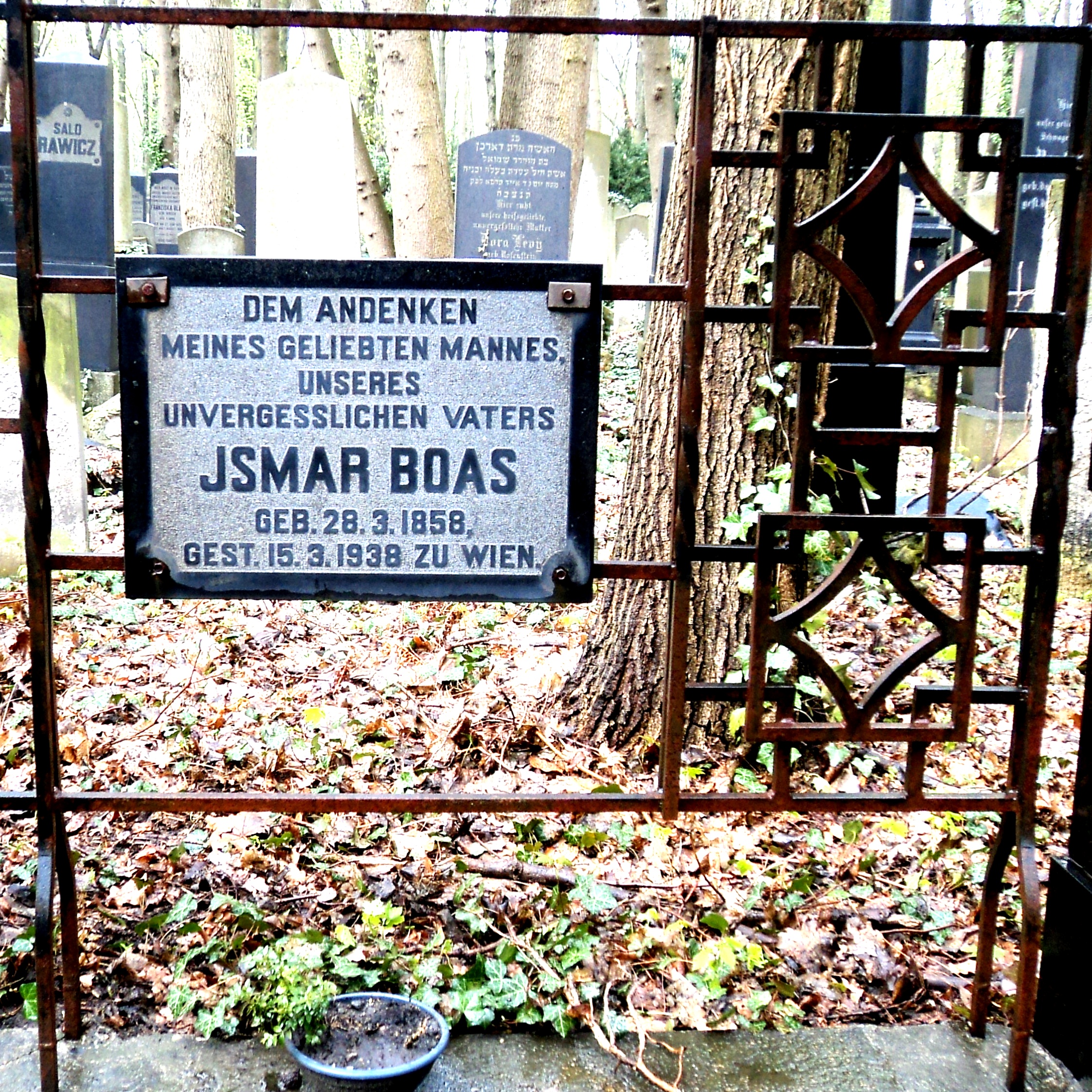 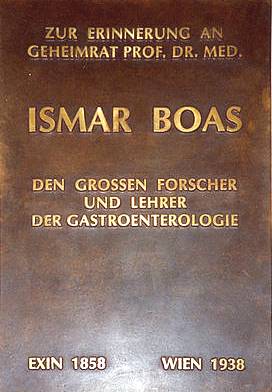 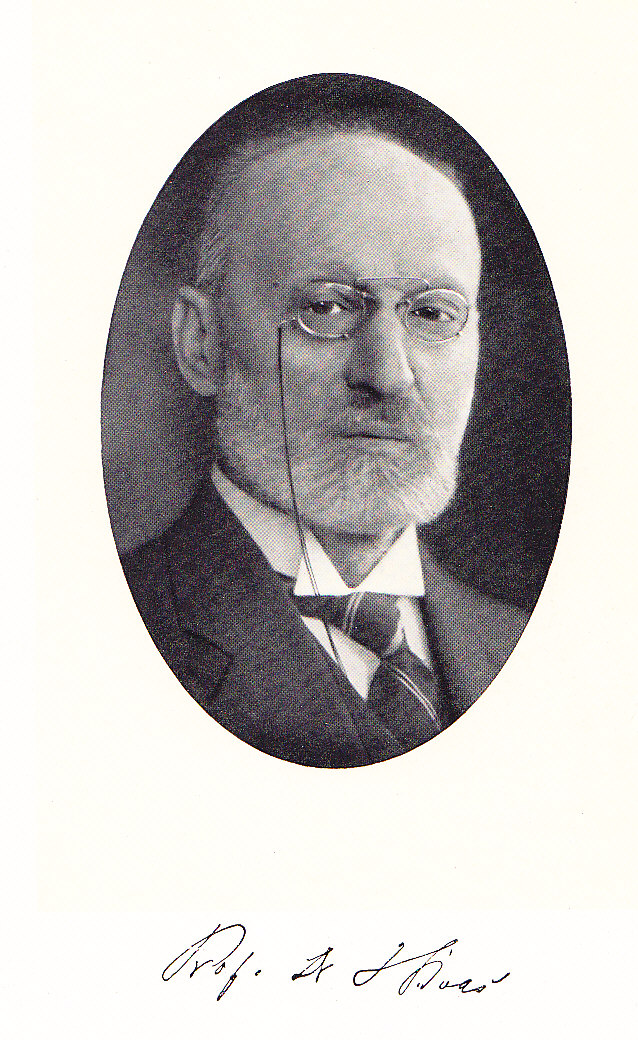 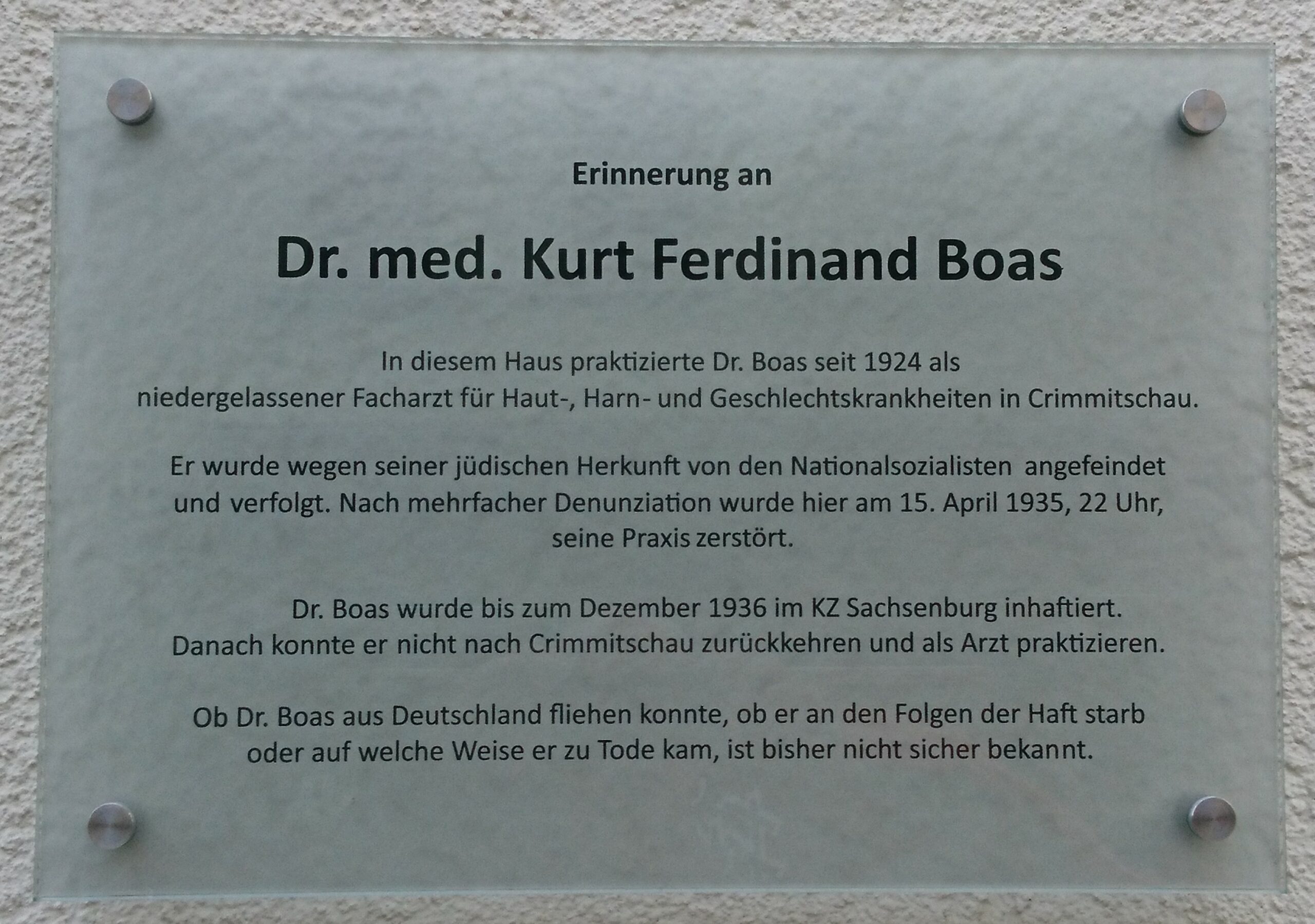