Early specialist in X-ray diagnostics of the gastrointestinal tract

Ernst Rachwalsky was born into the family of the merchant Julius Rachwalsky and his wife Emma, née Krauss, in the former Glatz/Kłodzko, Lower Silesia in 1889.

Rachwalsky took up his medical studies in Munich in 1908. These were interrupted by the First World War. He completed his state examination and doctorate at the Medical Faculty of the Friedrich Wilhelm University in Breslau in 1917 with the doctoral thesis “Zur Kenntnis der als Mammaechinococcen beschriebenen Cysten der Brustwand”. Rachwalsky had wirtten his thesis under the supervision of Eduard Melchior at the Breslau Surgical University Clinic, which was headed by Hermann Küttner. Melchior had to leave Germany in 1935 due to Jewish ancestors and fled to Turkey.

Rachwalsky actively participated in the First World War. He sustained a severe injury, of which 80 per cent was officially recognised as a war injury.

Rachwalsky was an intern with Emmo Schlesinger in his Berlin polyclinic for stomach and intestinal diseases in 1921. Schlesinger was an internist who had worked with Hermann Strauss in 1909. As an internist, he focused on the diagnostic possibilities of X-ray technology for the gastrointestinal tract from an early stage.

Rachwalsky set up his own practice as a specialist with a focus on X-ray diagnostics of the gastrointestinal tract in Berlin in 1926. He was intensively involved in the further development of X-ray diagnostics, including the gall bladder. Rachwalsky ran a practice with a health insurance licence at Friedrichstrasse 19 in Berlin and took over Emmo Schlesinger’s private clinic at Augsburger Strasse 66 in Berlin.

Rachwalsky fled from Germany to London in 1936. He managed to take the Pohl Omniskop X-ray machine he used with him to England.

In England he had to study for the English medical examination, which he completed in an abbreviated form in Glasgow, Scotland, in March 1939. He was released from internment as an enemy alien after the outbreak of the Second World War in 1939.

In London, Rachwalsky had been practising as a medical practitioner and also performed diagnostic radiology since October 1937. He practised in London’s Upper Wimpole Street in the 1950s. His patients were recruited, among others, from the circle of German-Jewish refugees living in London. His patients included Edith Strauss, the daughter of Hermann Strauss, who had emigrated from Germany.

He was granted English citizenship on 10 January 1948. During his time in England, Rachwalsky was in close contact with influential gastroenterologists there, such as Henry Avery.

Ernst Rachwalsky died in London in December 1962 at the age of 73. 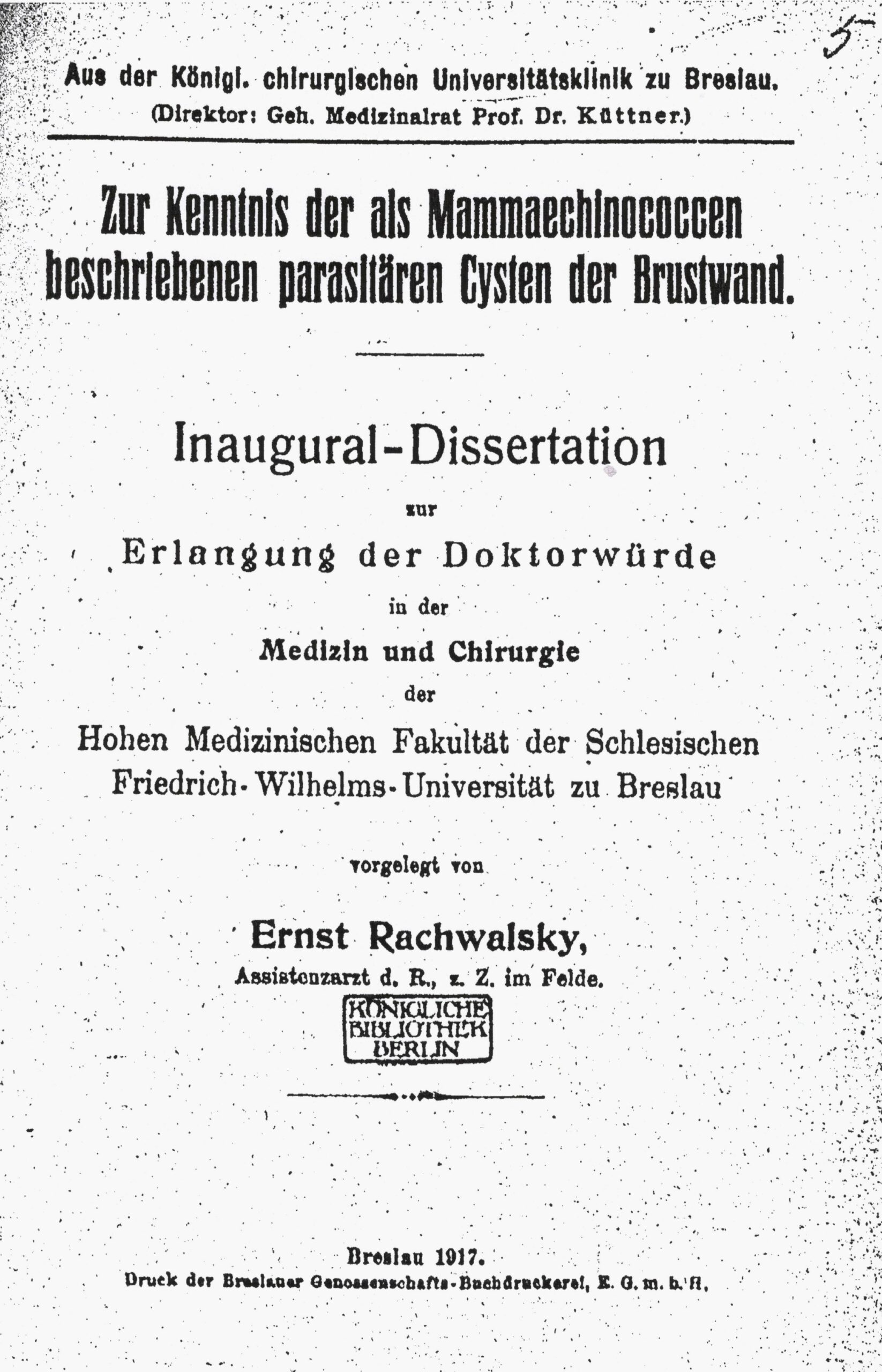